Reports: Manchester United Eager to Sign Jadon Sancho before the start of Euro 2021 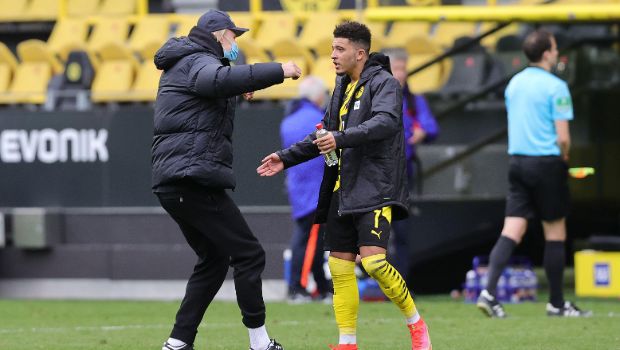 Sancho has been heavily linked with a move to Old Trafford since last year and it looks like the Red Devils will go all guns out to make the deal happen this time.

According to Bild, a German news outlet, the deal could happen very soon. Sancho is also expected to be a part of the England squad for Euro 2021.

Manchester United were very keen on signing Sancho last season but Dortmund’s asking price of £108 million was a bit too much for the Red Devils at that time. But the price this time is going to be a lot lower as Sancho suffered a slight dip in form this season, which clearly indicated that he isn’t having the best time at the club.

Moreover, Dortmund Sporting Director Michael Zorc revealed last month that Sancho has a Gentleman’s agreement with them. That means the youngster is free to leave the club this season if they get a good price.

The Red Devils have improved a lot since last season under Ole Gunnar Solskjaer but it seems like they are still missing a couple of vital pieces in their jigsaw to challenge the likes of Manchester City and Liverpool. Sancho’s signing will give them the much needed edge in their attack.

United need to complete the deal soon, though. Reports suggest that Dortmund are looking to get the deal done as soon as possible and they will also face competition from clubs like Liverpool.

As far as the results this season go, Manchester United look all set for a second-place finish in the Premier League after they lost out to Leicester City on Wednesday. They were knocked out of the Champions League quite early as well and lost out to Leicester City in the FA Cup semi final. The Europa League is now their only hope for a silverware as they face Villarreal in the final on May 27.