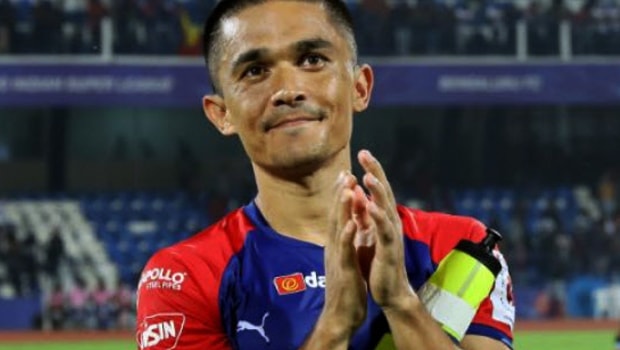 Inivalappil Mani Vijaya, a former striker of the Blue Tigers who had 29 goals in 66 appearances between 1989 and 2004, stated this during an Instagram session.

He disclosed that he sees all the national team captain matches and advises youngsters to see Sunil Chhetri as a role model to look up to.

“I watch all your matches. I always tell the youngsters to look up to you. You can easily continue to play for the national team for at least three more years. You shoulder so much workload both at the club level and the national team. That is really brilliant.”Vijaya was quoted saying in an Instagram session.

Chhetri, on his own part, showed humility, saying the kind of success he has had is because he was playing in an Era where the Indian football legend IM Vijaya had retired.

Meanwhile, both players stated their regrets at not having the opportunity of playing in the same team.

“I always tell my friends that I have been lucky to have got the opportunity to play with most of the players I look up to. But, the regret I have is that I could not play with you,” Chhetri was quoted.

Sunil Chhetri has 115 appearances for India scoring 72 goals since 2005. He is India’s all time top goalscorer.