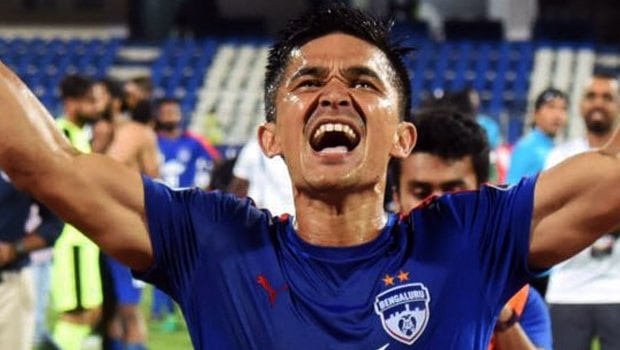 Football interest in India is nowhere near cricket, but slowly and surely, one man has done more than his share to bring the beautiful game closer to hearts of the Indian public.

Sunil Chhetri’s name comes up almost instantly when one talks about Indian football today, and the Bengaluru FC and Indian national team captain has certainly earned his reputation as an exemplary footballer.

Born in Secunderabad, Telangana, Chhetri was exposed to football from a young age, thanks not only to his father, an engineer for the Indian Army who also played for their football team, but also his mother and twin sisters, all of whom played for the Nepal women’s national team.

With inspiration all around him, Chhetri’s professional football career kicked off with the revered Mohun Bagan club. Today, Chhetri is India’s highest goalscorer, with 72 from 113 appearances, second only to Portuguese legend Cristiano Ronaldo’s 95 from 162, among active players.

On the domestic side, he led Bengaluru FC to their first Indian Super League (ISL) title last year in just their second season in the league. Along the way, he also picked up four I-League titles, won the Nehru Cup thrice and the SAFF Championship on two occasions.

But through all his professionalism and expertise in his chosen craft, Chhetri’s humility and undying passion to make Indians care about the beautiful game shines through the most. A popular example of this arose during the 2018 Intercontinental Cup, when Chhetri took to social media and joined his hands to make an earnest request.

This is nothing but a small plea from me to you. Take out a little time and give me a listen. pic.twitter.com/fcOA3qPH8i

This heartfelt call for Indians to attend football matches struck a chord across the nation. Even sports celebrities from other disciplines joined in the cause, with the likes of star cricketers Virat Kohli and Sachin Tendulkar, along with tennis ace Sania Mirza, sharing Chhetri’s post on social media.

The effects were reflected in the turnout for the next game, against Kenya, as the tickets were sold out before the matchday itself. India put up a performance deserving of the adulation, as they beat Kenya 3-0, with Chhetri scoring a brace in his 100th match for India before going on to win the tournament.

Fast-forward to 2019, when India only managed a draw against the far lower-ranked Bangladesh in the World Cup Qualifiers in October. The Viking Clap that followed the result was criticised by some. However, they failed to realise that the cheers were a demonstration of the support, hope and unity Chhetri has helped inculcate within the Indian football fanbase.

It wouldn’t be wrong to surmise that a player of Chhetri’s calibre should be playing for one of the European clubs in the thick of continental competition. While he has played for Sporting Lisbon in the LigaPro, nothing came of negotiations about moves to English clubs Leeds and Celtic. Regardless, Europe’s loss turned out to be India’s gain, it’s about fair to say.

With the recent plans to unify Indian football going into effect over the next few years, the drive toward the day when India is a football powerhouse like Brazil or France may not be too far away, but Chhetri will always be remembered as one of the unrelenting diehards who helped drive India toward that dream.