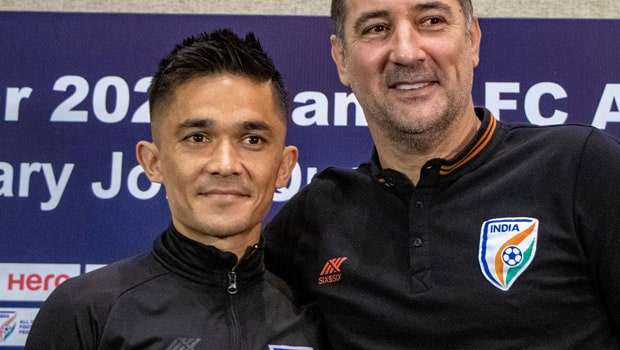 The match was played at the Jassim Bin Hamad Stadium in Doha, Qatar and it was a game in which India’s fortunes rested. They needed a win to finish third in the group stage as 2023 AFC Asian Cup qualifications are also at stake. It was a rather cagey game with India dominating possession but both sides failed to create that many clear cut chances. Although India had the impetus to march forward the Bangla Tigers were resilient in defence for most of the game until Chhetri broke the deadlock in the 79th minute. He calmly headed it past Anisur Rahman, the Bangladeshi custodian to hand India the lead.

Chhetri scored again when Suresh Singh Wangjam worked his way in the penalty area and then slotted a great cross to Sunil Chhetri who controlled it with precision and curled it beyond the reach of the goalkeeper. The brace in this game took Chhetri’s tally to 4 goals equalling the record of India great IM Vijayan who also has scored four goals in a winning cause at the World Cup Qualifiers.

Vijayan who is a legend of the game plied his trade for the Indian national team for 14 long years. He featured in three World Cup Qualifiers starting from 1994, 1998 and 2002. Four of his goals came in the winning causes for India.

India registered their first win in the current World Cup Qualifiers campaign with their win over Bangladesh. The Blue Tigers are now in the third position with six points and will play their penultimate match against Afghanistan.

Before this India started with a loss against Oman and then drew against Qatar, Bangladesh and Afghanistan. Then in the second leg, they lost to Oman again and recently suffered a narrow 0-1 defeat against Asian Champions Qatar. Hence a win against Bangladesh was very important.

India’s last match against Afghanistan will determine where Igor Stimac’s men will finish in this current World Cup Qualifiers campaign. Finishing third will give India the upper hand in their qualification for the 2023 AFC Asian Cup and that is something that Stimac and his men are aiming for.