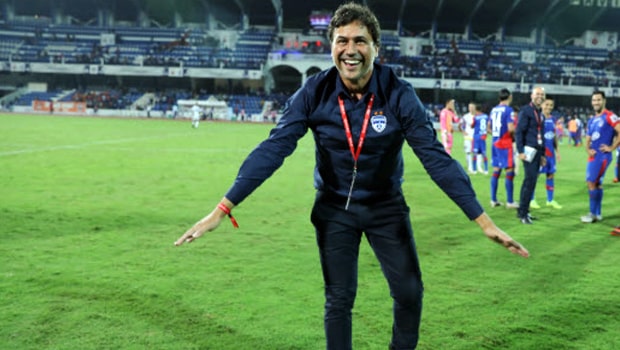 The Bengaluru FC chief coach Carles Cuadrat is delighted after his team drew first blood in the first leg of the second semifinal against ATK FC.

Cuadrat was happy with his team show at Sree Kanteerava Stadium as the players came up with a complete performance. The Manager stated the players gave everything they got as they played their hearts out in the all-important clash of the season.

The head coach showered praise on his players and added that they are giving everything to the team in the best possible way. Furthermore, Carles Cuadrat believes it was a great result at home for his side as the opponents were fresh as likened with them. Cuadrat added the players are delivering whatever he is asking them to.

At the post-match press conference, Bengaluru head coach Carles Cuadrat praised his players and stated, “I think the guys showed big heart. It is one of those seasons where a lot of things are not happening for us. But against a top team, the guys got a result which is difficult to get. ATK were fresh. We have played double the number of games they had played in February.”

“My players are giving everything for the club and the team. They are doing whatever I am asking them to do on the pitch. It was very nice that Sunil (Chhetri) came to celebrate the goal with me because it shows that he is really happy with how we are doing things,” he added.

The Blues head coach was full of praise for 19-year prodigy, Suresh Wangjam, who was awarded the ISL Emerging player of the Match. Carles revealed the midfielder was up and ready for the match despite playing 120 minutes in the AFC game. The youngster didn’t let his coach down as he came up with a complete performance at both ends of the pitch.

The Spaniard added, “He is giving us a lot. I asked him yesterday if he feels ready to start the game because he was playing 120 minutes in the AFC Cup game. But he told me that he was ready to help us. He has been helping us a lot. He is doing a wonderful job. He was creating chances in attack and helping in defence. He is having an impressive season. I am sure that he will soon have an opportunity in the national team as well.”

On the other hand, Carles Cuadrat had decided to bench Ashique Kuruniyan and Udanta Singh. The head coach explained his decision to keep them out of the final XI but also added that they might be used if the team makes it to their third consecutive ISL final. Carles revealed he is trying to play the best combination according to opposition and conditions.

“Ashique and Udanta are my players and I will support them. I am ready to help them. They are wonderful professionals. But at the moment, I have to make decisions. Because of the work the other guys are doing, I try to pick my best XI for specific games. I have a lot of confidence in them. They are my players. I hope that they can make the impact in the next leg and in the final, if we arrive at the final,” said Cuadrat.

Bengaluru FC have a one goal advantage leading up to the second leg of the semifinal. The Blues will need to keep up the good work to make their way into another ISL final. But Sunil Chhetri-led will be down to 10-man as Nishu Kumar was sent off after his challenge on Roy Krishna in the 84th minute of the game.

The second leg will take place at Vivekananda Yuba Bharati Krirangan Stadium in Kolkata on 8th of March.