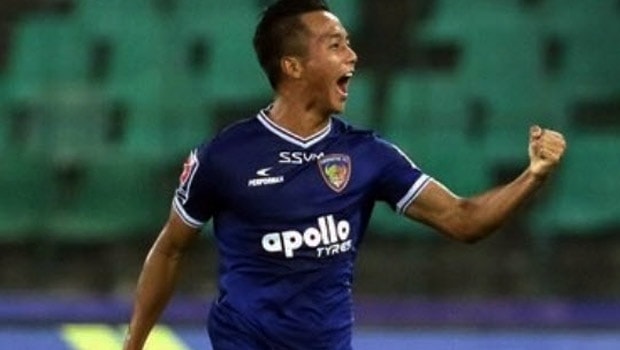 With the domestic season already done and dusted due to the coronavirus outbreak, the All India Football Federation (AIFF) has asked coaches from the I-League and the ISL to nominate players for the best Indian player of the year award. That said, we take a look at the top three contenders from the season gone by.

The 26-year-old wingback played a crucial role in ATK’s ISL title victory this season. He was a constant threat from the right wingback position to the opposition defences. His run ups were well judged and the way he linked up with ATK midfielders and forwards in the final third was tremendous. A total tally of six assists to his name this season sum up the contribution he made in ATK’s success. It was his two assists that helped ATK to stage a grand comeback in the second leg of the semifinal against Bengaluru at home. Moreover, he was an equally influential figure at the back as well. Das was swift in tracing back his path to the backline even after running to the other end of the pitch. He was making a comeback from a career-threatening injury but he didn’t seem rusty at all. Hence, Das is certainly one of the deserving players to win the award.

It feels so amazing to come back home ISL Champions! I have so many emotions because this is such a special win for me. From injury last year to rehab & coming back to play my best football & then winning the final. It doesn’t get better than that. (2/3) pic.twitter.com/Qvvo5giSpw

The 22-year-old seemed a bit off colour during the first half of the ISL season but became a formidable force in the second half under manager Owen Coyle. Chhangte was a consistent player in the left wing for Chennaiyin FC this season. His pace and trickery made it difficult for opposition defences to contain him and improved finishing abilities helped him in netting seven goals this season. He scored a goal each during each of the legs of the semifinal against FC Goa and also became the first Indian player to do so. No other Indian scored more goals from open play in this ISL season than Chhangte. Thus he looks like a strong contender for the award as well.

He is another Indian player who has taken his game to a whole new level this season. Fernandes was instrumental during India’s FIFA World Cup Qualifier campaign as he provided three assists from the five matches and went on to enjoy a terrific ISL season with FC Goa thereafter, during which he scored two goals and provided seven assists in 17 appearances. He was sensational while taking set-pieces throughout the course of the season and his pass accuracy was exceptional as well. It is fair to say that Brandon matched the quality of a lot of overseas players this season and hence, he is another strong candidate for the award once again.