Home » Football » We are ready to face the only unbeaten team: Mumbai City FC’s Des Buckingham

We are ready to face the only unbeaten team: Mumbai City FC’s Des Buckingham 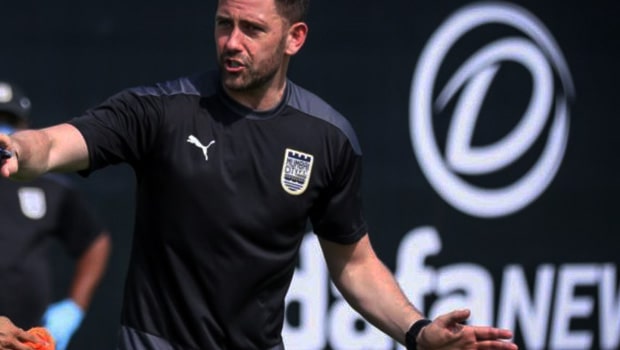 Mumbai City FC head coach Des Buckingham has stated that they are ready to face Chennaiyin FC, which is the only unbeaten team in the ongoing Hero Indian Super League. Mumbai will lock horns against Marina Machans at the PJN Stadium, Goa on Wednesday.

Chennaiyin FC has thus far played four matches out of which they have won two and as many have ended in draws. On the other hand, the defending champions have won four out of the five matches they have played while they have lost one. Mumbai is currently at a numero uno position in the points table with 12 points under their bag.

Mumbai defeated Jamshedpur by 4-2 in their previous match whereas Chennaiyin FC’s last game ended in a 1-1 draw against ATK Mohun Bagan.

Des Buckingham said in the pre-match press conference, “It doesn’t matter where you are on the table right now. It matters where you are at the end of the season, so we will take every game one at a time. It’s important we didn’t get carried away after our first result and we didn’t get carried away after the second when we had one win and one loss. So our focus is very much on the next one and we’re expecting another tough game from another very good team. They’re unbeaten at the moment. The only team left in the league that is unbeaten, so it’s a challenge, but one that we’ve had some time to prepare for and one that we’re very much ready for”.

Buckingham is only 36 years old and has 19 years of coaching experience. The Mumbai City gaffer added that his aim is to get the best out of the team’s young players and guide them on the right track.

He added, “I’m a young coach at 36 but this is my 19th season of coaching, so, I’ve been fortunate in that 19 years to work across a real plethora of different environments with very good people. So part of the remit behind me coming in here was my background and experience of working with youth players. There’ve been some wonderful youth players I’ve worked with who have gone on to do some wonderful things, and that certainly was one of the assignments that was to come in here and to take that on.

He continued, “We’ve said all along that we want the best Indian players, whether they’re young or old here at Mumbai, because not only do we want to develop them, we want them to play well with an old style. So, whether it’s the young players and having the opportunity to continue developing them or whether it’s the senior players, it’s very much the same. I think my background in working in that space was a part of me coming here as well”.

Meanwhile, Wednesday’s Hero ISL fixture will be between Mumbai’s attack and Chennaiyin’s defense. Mumbai have thus far scored 16 goals in five matches, which is the most in the ongoing season while they have conceded seven. On the other hand, Chennai has scored four goals in as many matches while they have conceded only two, which is the least so far in the tournament.

Buckingham concluded, “I think you have to look at it in context when you say there are only four goals scored. That’s what I’ve seen. They are the team that leads the league with the most shots on goal. So although they may have not scored the amount that they would have liked there, certainly creating opportunities on the opposition’s goal. So that’s something we definitely need to be aware of and we’ve prepared for because we want to be the team that you know come game day, that those chances do turn into goals”.