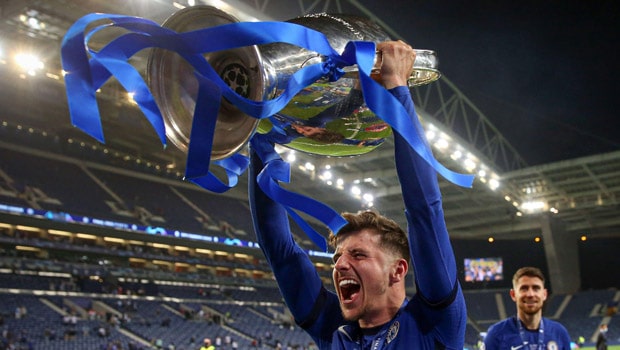 Chelsea were crowned as the champions of Europe after they defeated Manchester City in the UEFA Champions League final by 1-0 at the Estádio do Dragão, Portugal on Sunday to clinch their second title of the elite tournament.

Mason Mount stated that they are now the best team in the world and nobody can take away that title from them. Mount played an instrumental role in Chelsea’s success as he provided the assist to Kai Havertz, who scored his maiden UCL goal. Mount found Havertz in the 42nd minute of the game through a long pass and the German was able to find the back of the goal.

Mount has been a consistent performer for Chelsea and the 22-year old English player was able to deliver on the big stage.

Mount added that it is an amazing feeling to win the UEFA Champions League as Chelsea have lost two crucial finals. Chelsea had last won the same event back in 2012 when they defeated Bayern Munich on penalties by 4-3.

“I can’t put it into words. It’s impossible,” Mount told BT Sport.  “I just mentioned then that I’ve played in two finals for Chelsea and we lost them both.

“The way that hurt … It’s all I’ve dreamt of winning a trophy with Chelsea. To go all the way in the Champions League. We played some tough teams. We are in the final and we won it. It’s such a special occasion.

“At this moment in time, we’re the best team in the world. You can’t take that away from us! “What a team Man City are. You have seen what they did in the Premier League. It was such a tough game. We got a goal and defended the whole game. We left everything on the line and we won. What can I say? Loads of staff that have come through.

“It is unbelievable. My dad has just come down from the stands. I burst into tears seeing him. I thank my family for everything.”

Mount had an outstanding second season for his boyhood club. The youngster played 54 matches for Chelsea in the concluded season in which he scored nine goals and provided as many assists.

Mount was delighted with the team’s performance as Chelsea were the better team on the particular day. The Blues were right on the money with their counter attacks in the first half and then solidified their defense in the second half after taking the lead.