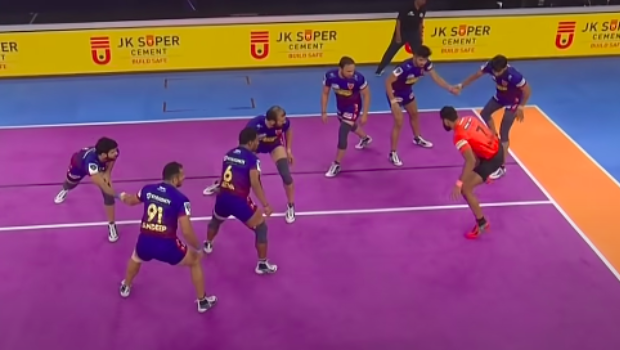 U Mumba will lock horns against Dabang Delhi K.C. in the 122th match of the ongoing Pro Kabaddi League 2022 at the Gachibowli Indoor Stadium, Hyderabad on Tuesday. With only two spots remaining for the playoff stages, both of these teams will want to come up with their best.

The defending champion Delhi is currently in sixth place with nine wins, 10 losses, and one tied game. Delhi has a total of 55 points under their bag.

On the other hand, U Mumba is in eighth place in the standings with nine wins and 11 losses. U Mumba has a total of 51 points in their kitty.

When these two teams had met earlier in the season, Dabang Delhi K.C. had won by 41-27.

Meanwhile, U Mumba had lost their previous match against Gujarat Giants by only two points. Pranay Rane top-scored with 11 points for the team.

On the other hand, Dabang Delhi K.C. lost their last game against Puneri Paltan by a margin of three points. Naveen Kumar scored 16 points for his team.

Match Prediction: Dabang Delhi K.C. will enter the contest as favorites against U Mumba.