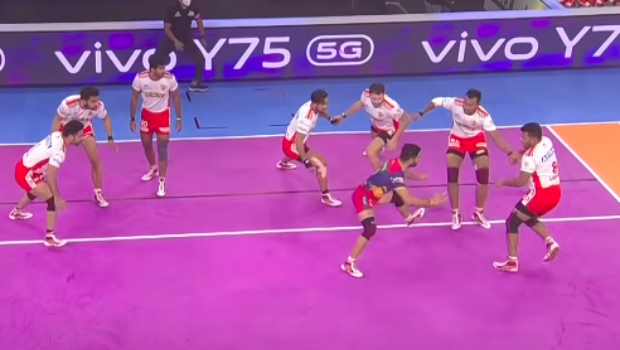 Gujarat Giants will take on U.P. Yoddhas in the 93rd match of the ongoing Pro Kabaddi League at the Gachibowli Indoor Stadium, Hyderabad on Monday. The last time these two teams had met earlier in the season, Gujarat Giants had won by 51-45 against the U.P. team.

Gujarat Giants have won five matches out of the 14 they have played. The Giants have lost eight matches and tied one and they are currently in 11th position in the standings with 33 points.

U.P. Yoddhas, on the other hand, have won seven and lost six matches in the 15 games they have played. The Yoddhas are currently in the fourth position in the points table with 45 points.

The Yoddhas lost their previous match against Jaipur Pink Panthers by a margin of 13 points. Pardeep Narwal scored 14 points for the team but they ended up on the wrong side of the result.

On the other hand, Gujarat Giants lost their last game against Bengaluru Bulls by a margin of seven points. Parteek Dahiya scored 10 points for the Giants while the skipper Chandran Ranjit added 12 points.

Match Prediction: U.P. Yoddhas will enter the contest as favorites against Gujarat Giants.