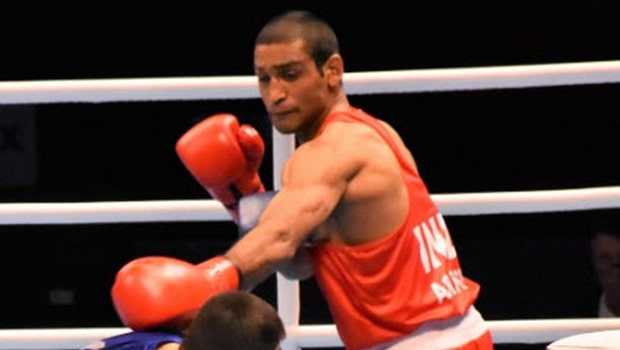 Indian Boxer Ashish Kumar who participated in the 75kg category knocked out Maikhel Muskita of Indonesia 5-0 to secure his place in the Olympic games 2020.

India has been getting it right in securing Olympic quota in Boxing with four boxers already securing their places on Sunday with Ashish Kumar the latest to secure his ticket to the Tokyo 2020.

Meanwhile, the first three Indians to seal their qualifications ticket for the Tokyo 2020 Olympics are  Asian Championships Gold medalist Pooja Rani who also competed in the 75kg category, two-time world championship bronze medal winner Lovlina Borgohain [69kg] and Vikas Krishan who is also commonwealth games gold.medalist in the 69kg category as they reached the Asia/Oceania Olympic qualifiers on Sunday.

Vikas Krishan had to work hard and showed his tenacity in a problematic bout he defeated Sewonret Okazawa of Japan who is seeded in the third position and also an Asian Championship Silver medalist.

Fourth seeded Pooja Rani, however, had an easy game over her counterpart as she crushed Thailands Pornnipa Chutee

Lovlina Boroghain who was seeded second in the women 69kg category secured her Olympic ticket for the first time and a semifinal spot in the event which a brilliant display of aggressiveness which gave her a 5-0 victory over Uzbekistan’s boxer Maftunakhon Melieva.

However, the only sad thing for India in the first session of the first quarter-final was the 2-3 narrow loss of Sachin Kumar in the 81kg against veteran experienced Daxiang Chen from China.

There is still a glimmer of hope for Sachin as he still has the chance of making qualifications to the Olympics as the will be an opportunity for five boxers as the losing quarterfinalist will have another shot.

The Asian Zone Olympic qualifiers are currently going on in Amman, Jordan.