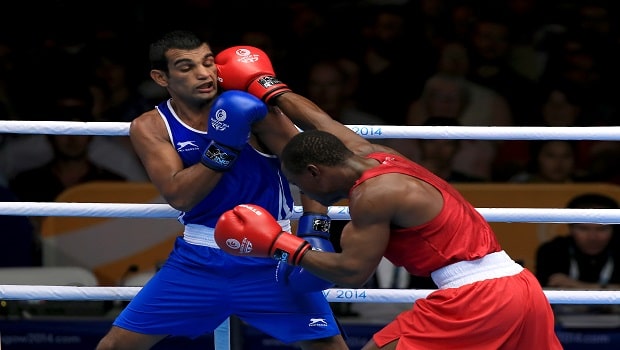 India boxer Mandeep Jangra marked his return to the ring with a hard-fought split decision win over Dinesh Dagar to help North East Rhinos hold Bengaluru Brawlers to a 1-1 draw at the Big Bout Indian Boxing League on the 3rd of December this year.

Reyal Puri who represented the Brawlers left Ergashev Timor from Uzbekistan with a bleeding nose during the second round of the opening bout which made the referee stop the 91kg class contest.

However, that result put a lot of pressure on the 2013 Asian Championship finalist Mandeep Jangra when he faced the taller and younger Dinesh in the men’s 57kg bout.

Mandeep who been away from the limelight for a while now, showed no signs of fear as he let Dinesh wore himself out with an aggressive approach and waited for the right opening to land scoring punches to win the approval of four of the five judges.

Reyal and Timor spent most of the first round sizing up one another with four judges scoring in favour of the Indian from the North East Rhinos.

After resuming the bout, Reyal found the opening to land two powerful punches on Timor’s face. A Doctor was quickly beckoned upon to the ropes to see if the bleeding could be managed, but after two such stops, the referee decided to end the contest in Reyal’s favour.