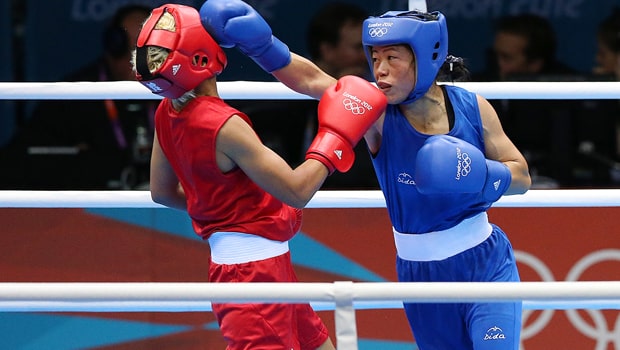 The distinguished MC Mary Kom continues her quest for glory, as she entered the quarterfinal of the Women’s World Boxing Championships in Ulad-Ude, Russia on Tuesday. The six-time world champion blanked Thailand’s Jutamas Jitpong 5-0 in the round-of-16 in what was a bout tougher than the scoreline suggests.

The 21-year-old Jitpong was seemingly unbothered by her opponent’s CV and played the role of the aggressor, albeit without much success early in the match. After spending a few minutes sizing up the Thai boxer, Kom showcased her class and stamped her authority over the contest with some sharp counter punches that put Jitpong on the backfoot.

With her heavy heaves no longer landing right, Jitpong was out of answers for Kom’s swift moves and timely punches in rounds two and three, which confirmed her victory and a place in the quarters. Kom, who is seeded third in the 51 kg class, was handed a bye in her first round.

Kom looked like she was hungry for more silverware and it was evident from the way she eventually overpowered Jitpong.

She surprisingly failed to capture a medal at the premier event for eight years before finally ending her drought in front of her home support in New Delhi last year. The highly ambitious boxer moved up a weight class for this year’s championships and is hunting an unprecedented seventh gold medal at the event.