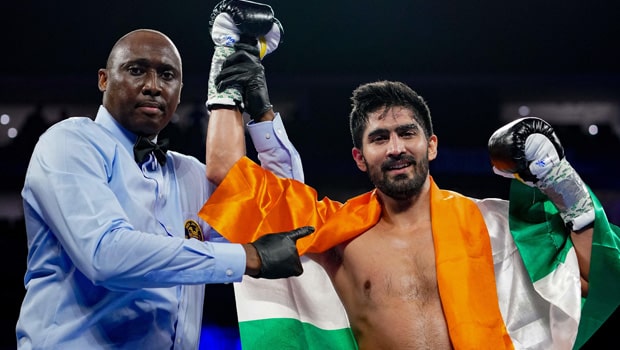 Indian star boxer, Vijender Singh is set to return to the ring after a long time and the pugilist is not worried about facing his Russia opponent, Artysh Lopsan. Despite the Russian’s height, Vijender is confident of defeating the 26-year old and keeping his unbeaten record intact.

The bout is scheduled to happen on Friday where Vijender and Lopsan will trade punches in a super middleweight (76kgs) showdown. The bout will take place in a very unique venue and therefore the fight is dubbed as the ‘BattleShip’ as it will happen on the rooftop deck of the Majestic Pride Casino Ship in Goa.

Both the boxers have arrived at Goa and are training very hard in the build up to the big fight.

Vijender Singh who has defeated a lot of top players and is unbeaten till now is not at all worried about his opponent. He is also unfazed regarding his height as he stands 6 feet 4 inches but Vijender feels that he will dominate inside the ring and secure his 13th win of his professional boxing career.

“He is tall and I will take it slow at the start but I’m confident of beating him nonetheless. Height is not everything and in boxing, you need strength and strategy. I have experience under my belt and Lopsan is still a kid,” said Vijender.

“My unbeaten streak will continue after March 19 and I’m sure everyone will witness an amazing day of boxing. The tougher the opponent, the more fun to beat him,” added the Olympic bronze medallist.

However, he also added how is not going too hard on himself during training as he wants to keep his weight in control.

“I’m pumped up and excited for this fight, I’ve started my training now. It’s mostly controlling my weight. I will not go too hard in the training.

“Goa is buzzing as usual. It’s always great to visit this amazing state and I am already feeling positive about my chances during the fight.”

The Russian boxer, Lopsan on the other hand believed that actions mean more than just mere words and therefore he warned Vijender to end his unbeaten streak by defeating him on Friday.

Vijender is a good fighter but I’m here to beat his undefeated streak. I’m ready for him to knock him out in the early round. It would be great to beat him in front of his audience. I’m sure Vijender will have a very tough time in the ring while facing me,” he said.

This has to be the most awaited fight of the year till now, firstly because of Vijender Singh fighting after a long time and secondly because of the theme of the fight. The bout at the rooftop deck of the Majestic Pride Casino ship makes it all the more exciting and elevates the level even more.