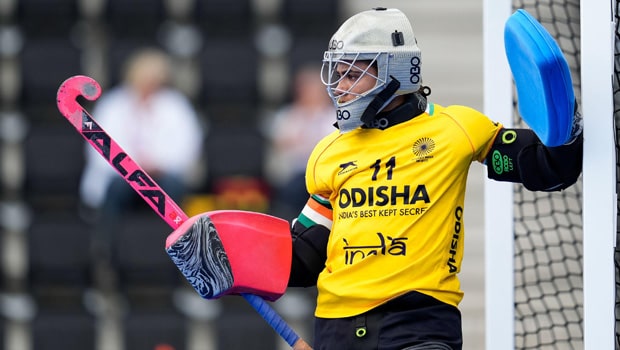 “Confident about our chances to win a medal,” says Indian Women’s Hockey team captain Savita Punia ahead of the Commonwealth Games opener

The Commonwealth Games are here and the Indian contingent will start the proceedings on the first day (July 29) with plenty of action. Both the Women’s cricket and Hockey team will kickstart the action. While Harmanpreet Kaur and company will face Australia in WOmen’s Twenty20 cricket, Savita Punia’s girls will take on Ghana in Pool A.

So it promises to be a very eventful day for the Indians as head coach Janneke Schopman and her girls will be up for redemption after a poor outing in the Women’s Hockey World Cup. They are looking to work their way through at the Commonwealth Games and a podium finish in Birmingham will probably ease out some pain after the horrendous World Cup performance.

Speaking in broader perspective India currently ranks fourth in the all time medals list. They were sensational at the Gold Coast as they won 66 medals  which included 26 Gold, 20 Silver and 20 Bronze medals. While they will be hoping to at least replicate that number, sports like Shooting and archery are not a part of the Games this time and it has been a blow for the Indians as they have had a stronghold in both the sports.

The Indian Women’s Hockey team are not going through a great patch, they are here for redemption and captain Savita Punia has her eyes on the podium. The Indian eves finished fourth in the 2018 edition of the Commonwealth Games and they are keen to better that record. In a virtual interaction, Savita shared her feelings ahead of the opening clash against Ghana at the Commonwealth Games. She said, “The whole squad is eagerly waiting to kickstart our campaign in Birmingham, as we want to make this Commonwealth Games special. We were disappointed with our performance in the last edition of the tournament, but this time around we will definitely look to do better.”

She went on adding, “We are confident about our chances to clinch a Medal and a resounding win against Ghana will provide the perfect start to our 2022 Commonwealth Games campaign.”

The only other time the Indian eves have faced Ghana was back in 2014-15 cycle at the World League ROund 2 where the Women in Blue smashed the African with a resounding scoreline of 13-0. Apart from Ghana the Indian team will be up against hosts England, Wales and Canada in the group stages in Pool A.