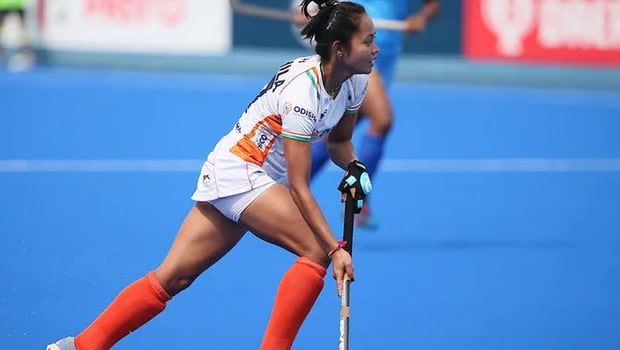 Indian Women’s hockey team’s pillar in midfielder, Sushila Chanu has completed 208 appearances for the country and is hungrier than ever to get more appearances under her belt. She has featured in back to back Olympics, won the bronze medal in the Asian Games back in 2014 but this will be her maiden World Cup appearance as the Indian eves gear up to kickstart the World Cup campaign starting from 3rd July.

Sushila is very excited ahead of India’s opening match against heavyweights England on 3rd July in Amstelveen, Netherlands. She highlights how things have not been great for her in the past as she missed out on the 2014 World CUp due to injury and then struggled for form for a large period. However now she has grown in confidence and is far more matured to face the big stage.

“In 2018, I missed playing the World Cup in London due to an injury. Subsequently, I struggled with the form which resulted in me missing out on the Asian Games that year. It was perhaps one of the biggest lows of my career. It was a difficult phase but I was determined to overcome it and earn my place in the squad again,” Sushila reminisced.

The midfielder also missed out the 2018 Asian Games where India won the silver medal, it was the ame year as the Wold Cup where also India reached the quarterfinals. However since her return Sushila Chanu has been one of the first names in the team sheet for Janneke Schopman and in Rani Rampal’s absence, Schopman will look to throw in as much experience as possible on the field as it is a very vital commodity in these tournaments.

Sushila completed her 200th appearance for the country while she was participating in the FIH Hockey Pro League as the Indian eves finished third. She will be one of the deciding factors for India in this World Cup.  “I am very happy and excited to have this opportunity to represent India at the World Cup. For many of my teammates, it’s their second outing at the World Cup but for me, it’s a first. It is an emotional moment for me and I surely believe it will be a memorable one for us,” concluded the experienced Indian midfielder.

India are in Pool B along with China, New Zealand and England. They will start their campaign against England on 3rd July followed by an encounter against China on 5th July and last they will face New Zealand on 7th July to finish off their group stage fixtures.