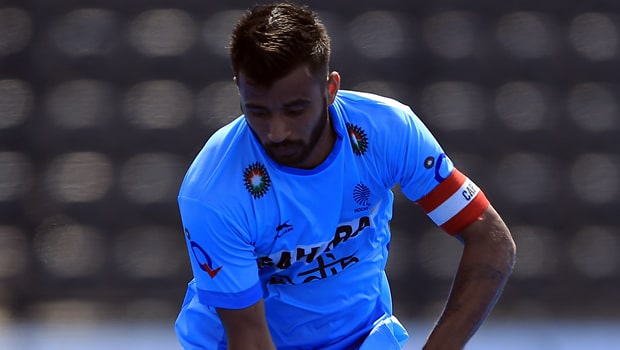 Manpreet Singh in contention for FIH Player of the year award

Indian men’s hockey captain Manpreet Singh was nominated last week Friday for the player of the year award by the International Hockey Federation (FIH) after he led the country to the Tokyo Olympics Tournament in Japan, which will be held in 2020.
Vivek Prasad and Lalremsiami were also nominated in the category of the men’s and women’s FIH rising star of the year award.

27- year old Manpreet Singh, who is also a veteran of 242 international caps, is the midfield maestro of the Indian team. Under his leadership as captain of the group, India beat Russia 11-3 on aggregate in Bhubaneswar last month to qualify for the Tokyo 2020 Olympics. The veteran player also revealed on his official twitter account appreciating his fans saying the nomination would not have been possible without their support, and even pleading for their votes.

The young and energetic 19-year old Prasad, a midfielder, led the Indian team in the Youth Olympics last year, where the country won a silver medal, he was also named the best young player at the FIH series finale last year.
Lalremsiami, a brilliant 19-year old forward, was a part of the Asian Games silver-winning women’s squad.

Other nominated players were Australia’s Eddie Ockenden and Aran Zalewski, Argentina’s Lucas Vila and Belgians Arthur Van Doren and Victor Wengez were the other five nominees in that category.

The brilliant 32-year old Ockenden, who is a veteran of 340 matches and Zalewski, led the Australian team in their country’s multiplayer captaincy policy, and they also partook in the FIH Pro League 2019 winning a gold medal, with Zalewski named the best player of the tournament.

The votes will be open until 17th January, and the winners of all 2019 FIH Hockey Stars Awards and the FIH Coach of the year award will be announced in February 2020.
However, the men’s and women’s FIH coach of the year will not be voted but will be picked by an FIH panel.