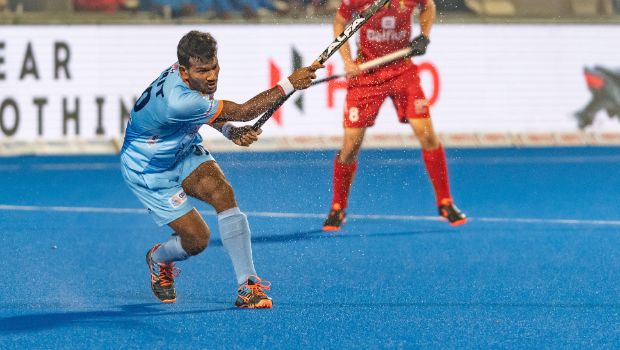 FIH Hockey World Cup 2023: I am not afraid of being hit by the ball – Amit Rohidas

Indian defender Amit Rohidas has revealed he is not afraid of being hit by the ball and has no issues being the first rusher. Rohidas has done a fine job for the Men in Blue in the ongoing FIH Hockey World Cup and he is always willing to put his body in front of the goal to save penalty corners.

India conceded as many as eight penalty corners against England and Rohidas played at the top of his game to keep the opposition at bay. Meanwhile, FIH president Tayyab Ikram recently stated that the federation will be making a few changes to increase the safety of the defenders during penalty corners.

Amit Rohidas told PTI, “I am not aware of what the FIH president said. But I have no fear of being hit by the ball. It has never come to my mind in the matches I have played so far.

Rohidas revealed he has enough protection on his body as a first rusher and there isn’t any risk.

Meanwhile, Varun Kumar was sent off for 10 minutes in the last 12 minutes against Spain in the team’s opening match of the tournament. The Indian vice-captain added they are working on their discipline to avoid such scenarios.

“It is not that we are getting cards just now. We have got cards in tournaments earlier also. We have worked a lot on this, on how we play in such a situation and the structure we will play,” said Rohidas.

Rohidas scored the opening goal from the penalty corner against Spain and he will look to continue the good form in the knockout stages.