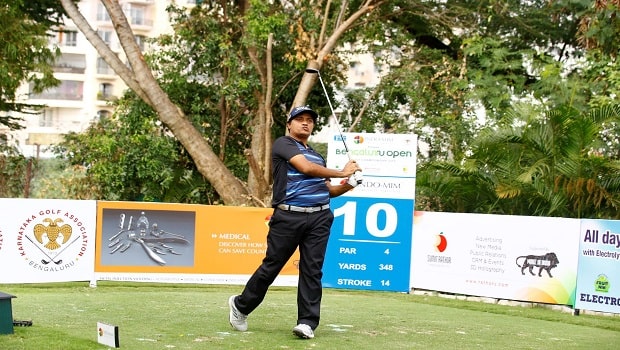 Karandeep Kochhar, Om Prakash Chouhan, Arun Kumar are maintaining a three-way lead in the first round of the ongoing Bengaluru Open Golf Championship 2019.

In the competition powered by Karnataka Tourism, Karandeep, Prakash and Arun got tied in the first round lead at five-under-67.

At the Karnataka Golf Association (KGA) course, Rahil Gangjee, Kapil Kumar and Abhishek Kuhar are in joint fourth, with a shot behind the leaders.
Recall that the Rs. 40 lakh event is also the penultimate leg of the 2019 TATA Steel PGTI season.

Having had a successful season where he had emerged in the top 10 four times on the PGTI and four top-20s on the Asian Tour Karandeep Kochhar continued his hot form on day one in Bengaluru by making an eagle and four birdies at the cost of a lone bogey.

The tall and lanky 20-year-old golfer began on a good note with an exceptional par on the 11th, and he was not in trouble with a brilliant chip to five feet.

Karandeep, who is the youngest ever golfer to win on the PGTI at the age of 17 and five months while still an amateur in 2016, completed his first birdie of the day on the 17th landing it within five feet once again.

Currently occupying the seventh spot on the PGTI Order of Merit, Karandeep moved up the leaderboard after he holed his second shot from 35 yards for eagle on the first hole. It was followed by two birdies and a bogey over the next four holes before he sank another 35-footer for his last birdie of the day on the sixth.

Speaking on his performance on day one of the competition, Karandeep noted that he performed well through the round by taking his opportunities on the last three holes as well. He, however, regrets misreading a couple of putts there.

While noting that his season has been consistent, the 20-year-old golfer is hoping to replicate his excellent form over the last two weeks of the season.

Speaking further, he said the round is a reminder of his second round in Mauritius at the Asian Tour event which was held two weeks ago where he had to negotiate similar windy conditions to have an excellent round.

He also described the good par save on the 11th as crucial as it helped him avoid an early bogey “that could’ve been telling.”