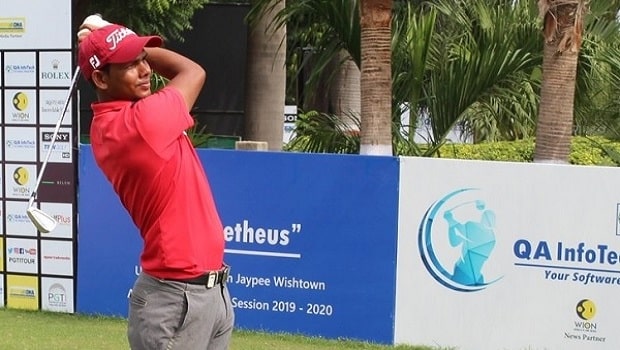 The duo share four-under-68 to take the joint lead in the tournament powered by Bharat Benz, a TATA Steel PGTI event, being played at the Royal Calcutta Golf Club (RCGC).

Being a competition that allows rookies to explore their talent, Yuvraj Singh Sandhu, Akshay Sharma, and Anil Bajrang Mane are tied third at three-under-69.

Kolkata based golfers, Sunit Chowrasia and Md Sanju are behind the leaders occupying the sixth spot with matching scores of two-under-70 at the Rs. 40 lakh event.

One of the high points in the game is the performance of 25-year old, Ankur Chadha. His level of confidence grew after good execution of a couple of tricky approach shots early in his round on the 10th and 12th. His quality tee shots were also evident when he approaches to pick up birdies on the 14th, 16th, and 18th.

He found the bunker on the par-3 second after conceding his only bogey of the day through the missing of an up and down. He, however, made up for his error when he recovered well from the rough on the fourth with a chip-putt for birdie.

His best game so far in the tournament was on the tough seventh hole. The young golfer who turned professional in 2016 found the center of the fairway with his tee shot before landing his approach to within eight feet of the hole, and he converted the putt.

Speaking on his performance after the game, Chadha said his good execution of the tough approach shots on the 10th and 12th helped him to settle.

He also said his strikes sank a couple of 10-footers to get his round going.
While noting that the approach on the seventh was not easy, he said he was able to manage to land it close enough to pick up a birdie, which he acknowledged to be the highlight of his round.

Speaking on his season so far, he said there are some good signs for him, with his scoring average much better than last year.

With the performance, he is likely to finish much higher on the PGTI Order of Merit this season as compared to 2018 when he finished 38th.

With the determination to end the year on a high note, he said seventh-place finish in Digboi last month was his best of the season, adding that he has been in good form since then.