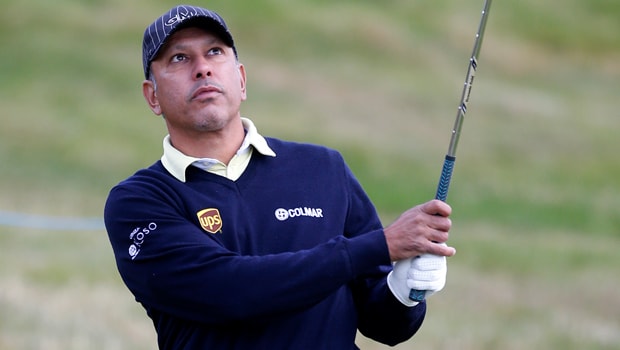 Veteran Indian golfer, Jeev Milkha Singh, has looked back on his formative years and glorious moments, naming the 201 Scottish Open as his best win.

Having been indoors like other athletes around the world due to the COVID-19 lockdown, Singh has been away from the rigours of competitive sport for over two months. In an interview with PGTI, the Indian golfing great often addressed by his nickname ‘Kaka’ revealed that he chose Scotland because it is known as the ‘Home of Golf.’

He also picked his triumph at the Volvo Masters in Valderrama, Spain, in 2006 as another high point. The professional who began his journey in 1993 stated that the year-end Tour Championship of the European Tour was also an achievement he can’t overlook.

He said it was difficult to pick among those two because they are among the most prestigious tournaments in the golfing world.

The 48-year-old who said both memories would stay with him for the rest of his life is a two-time Asian Tour Order of Merit champion. He is regarded as India’s most successful professional golfer with 13 international titles, and highest world ranking of 28. The titles include European Tour, Japan Golf Tour & Asian Tour.

Born in a sporting family, Singh’s mother, Nirmal Kaur, is an accomplished volleyball player. Although being good in multiple sports while growing up in a sporting environment, Singh said golf was always his passion, and he was supported whole-heartedly by his parents.

While considering himself as fortunate to earn a living from what he loves,  Singh said he had great competitors around him in his early years. He said the likes of Uttam Singh Mundy, Amandeep Johl, Amritinder Singh and Harmeet Kahlon put him on his toes as they grew up together in Chandigarh.

They competed hard against each other, thereby helping to improve each other’s game, and they finally played at the international level.

Speaking on mental training, which he said would have helped many athletes, especially during the lockdown, Singh noted that it was not an integral part of the game when he began, but he was one of the few who worked quite hard on it.