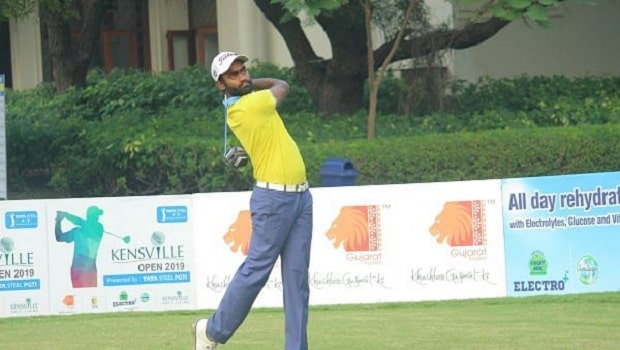 The tournament is a Rs. 40 lakh event played at the Kensville Golf & Country Club near Ahmedabad.

The experienced Shamim, who had led overnight leader by two shots, had a tenacious two-under-70 in the final round to emerge winner of the tournament.

He is now the wire-to-wire champion with a winning total of 13-under-275. With this success, this is Khan’s 15th trophy on the TATA Steel PGTI, making his overall 17th professional win.
Pune-based Udayan Mane, the only player besides Shamim to return four sub-par rounds during the tournament, came up with the last round of 71 to secure the runner-up spot at 10-under-278.

After holding on to his lead in the three previous rounds, Shamim Khan (66-68-71-70), Shamim had a good day, which was his best day with the putter, sinking five birdies at the cost of three bogeys.

The Delhi based extended his lead to three shots at the turn after making two 20-feet birdie conversions on the front-nine.
The 41-year-old

On the back-nine, Shamim dropped two bogeys after finding a tree on one hole and a hazard on the other. Despite that, he closed out the game with two birdies.

With others unable to catch up with him, he scooped the trophy, which his first title after a one-year gap.

He also earned Rs. 6,46,600 as prize money that pushed him up from 30th place to 14th position in the TATA Steel PGTI Order of Merit.

Speaking on the development, Khan noted that he putted the best as compared to the last three rounds before setting his win, and he also recovered well from tough positions on a couple of holes to make good bogeys.

He also revealed that he had it in the bag after birding the 14th, and Udayan bogeyed the 15th.

The lead grew to four shots with three holes left to play, and the 41-year-old knew that to win the title, he had to play safe, which he did from there and won.

Speaking the win, Shamim described it as a confidence booster having achieved it with a double-digit total score on a difficult course.

According to him, with difficulty experienced by players on the course, only Udayan and he had a double-digit total during the week, which reflected the tough scoring conditions at Kensville. Over-200.