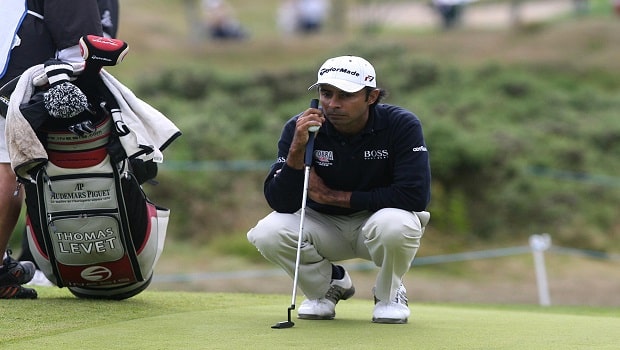 Indian golfer, Jyoti Randhawa, ended his performance in the 5th AfrAsia Bank Mauritius Open on Sunday on a positive note after returning a fine seven-under in a bogey-free in the final round score of 65.

The 47-year-old golfer finished in the 17th position in a tournament won by Danish golfer, 18-year-old Rasmus Hojgaard, who kept his nerve in a tense three-way playoff to win the Euro 1 million prize.

The Mauritius Open was a four-day tournament total of 274 at the picturesque Heritage Golf Cup.

Randhawa, played his fifth event on the European Tour as he holed a 10-foot eagle putt on the third playoff hole to win his maiden professional title.

Hojgaard has written his name in the history book as he is now the third youngest winner in European Tour history after Matteo Manassero and Danny Lee. He triumphed over fellow rookie Antoine Rozner of France and Renato Paratore from Italy after the trio had shared the lead at the end of regulation play with a tournament total of 19-under.

Speaking on his achievement, the Dane said he is short of words and over the moon for creating history. He also said it was a dream come true for him after his third playoff in the tournament’s five-year history.

Despite finishing 17th, Randhawa was by far the best Indian in the tournament after he carded a brilliant 65 on the final day of the tournament. The competition is co-sanctioned by the European, Asian, and Sunshine Tours.

Satisfied with his performance, which has raised hopes of better finishes in the coming weeks, he said everything came together for him at the tournament as he hit the ball well.

While noting that his wedges very close, he said the iron was excellent, but he could have done better with the driver.

The 47-year-old revealed that his favourite shots in the game was on Sunday on the ninth, on the 18th where he hit an eagle on the 14th (which is par five).
He explained further that he hit his irons well, and that helped on the golf course he described as demanding.