Sharmila lying seventh in Jabra Ladies; Lahihir hoping for a turnaround in Orlando 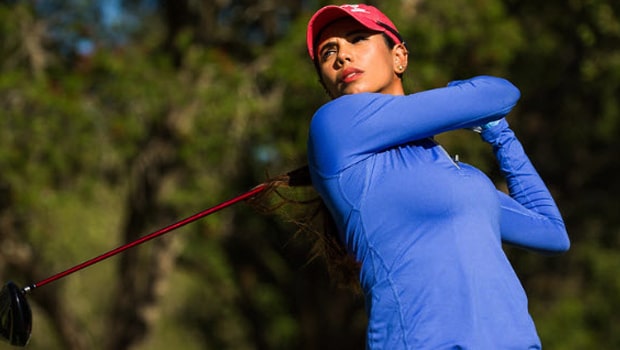 Indo-France golfer, Sharmila Nicollet, had a superb recovery on the back nine with three-over after eight holes in the first round of the Jabra Ladies Classic on the Sunshine Ladies Tour.

At the end of the round, she lies tied seventh, having finished among the top-10 last week. To get back to the groove, she bogeyed the third, fourth and eighth and then turned in three-over.

With four birdies and one bogey between 10th and 14th, Sharmila got her groove back. She then got another birdie on 18th to compile one-under 71 in the first round.

South African golfers are occupying the top three spots. They are Ashleigh Buhai, who is a three-time winner on Ladies European Tour. Ashleigh topped the table with eight birdies and an eagle against one bogey to have a nine-under 63. She also recorded five straight birdies on the back nine of the Glendower Golf Club.

She is four shots ahead Stacy Bregman, who is occupying the second spot while Kesley Nicholas is third at four-under.

Meanwhile, her fellow countryman, Anirban Lahiri, is hoping for a turnaround as he prepares to participate at the Arnold Palmer Invitational golf tournament.

The India golfer has been going through a rough patch this season. He has witnessed his longest stretch without a top-10 finish for a while. This has been the longest since the start of the wrap-around season he got onto the PGA Tour in late 2015.

His performance has affected his world ranking as well, as he now finds himself occupying the 480th spot. This is the lowest for the 32-year-old in almost a decade since November 2009.

In the last three Palmer Invitational tournaments he participated in, it has not been a pleasant outing as well. Lahiri finished T-76 after missing the cut in 2017, and T-69 in 2018 and 2019, respectively.

The winner of this season event goes home a USD 9.3 million. 31 of the top 50 in the Official World Golf Ranking are among the top contenders.

Let’s hope Lahiri comes through with better performance and result from this time around.