Home » Other Sports » Golf » Women’s British Open: Aditi and two other Indians set to tee off

Women’s British Open: Aditi and two other Indians set to tee off 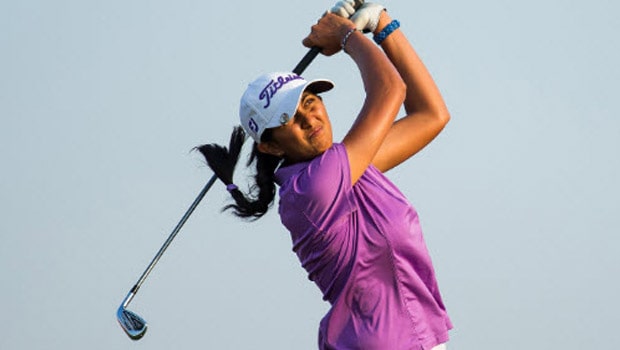 Three Indian women golfers will be teeing off for the first time in the country’s history at the prestigious Women’s British Open, which commences on Thursday.

They are Aditi Ashok, Diksha Dagar, and Tvesa Malik. The trio will be writing their name in the history books of the game in India and the golf world entirely as this is the first time such feat will be recorded by a country whose major sport is cricket.

The trio won’t be alone as their families and friends will be with them at the famed Royal Troon golf course, despite no spectators there to cheer them on.

22-year-old Aditi, who usually has her father on the bag, is with her mother, Maheshwari, this time. They had traveled from India after passing the COVID-19 test and followed up with the laid down guidelines. Aditi had participated in the recently concluded Scottish Open.

The father of 19-year-old Diksha, Col Narendra Dagar, will be playing his usual role as her caddie.

24-year-old Tvesa will be caddied by a friend and experienced European Tour pro, Kiran Matharu.

Tvesa, who is about to make her Major debut, said she already has experience playing with some European players, especially at home at the Hero Indian Open. This is where she had her first Top-10 last year. She, however, admitted that a Major in Scotland is a different thing entirely.

After participating at Scottish open last week, Tvesa described links golf as interesting. While stating that it has taught her how to understand the importance of missing it in the right place, the 24-year-old believes that the condition will be amplified this week in terms of wind and conditions.

Aditi, who will tee up on Thursday, will be closer to becoming the Indian with most Major starts.

This will be her 15th Major since her debut Major at the 2016 Women’s Open. She has now broken the record of Major appearances set by Jeev Milkha Singh, whose total is 14 and will be one short of Anirban Lahiri’s 16.

Since women have five Majors each year, compared to men’s four, she will break the record in no time, with age on her side.

Aditi had won the Hero Women’s Indian Open in her rookie year in 2016 at the age of 18. Speaking on the condition of the course, she is pure and in great shape.

She also noted that it’s a bit soft due to the rain the past couple of days. She expressed excitement in competing in such a storied venue with enormous history.