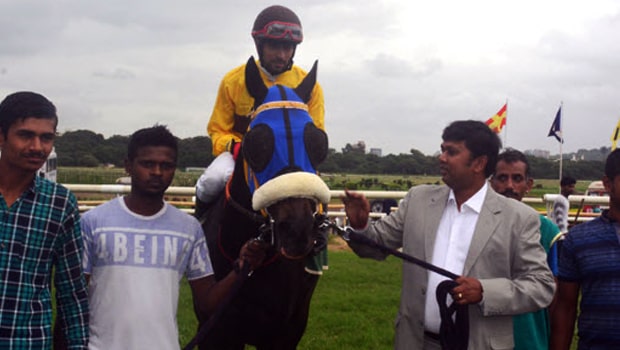 Grand Accord has thwarted the hope of La Rondine in the Gr 2 A C Ardeshir Trophy.

Rondine, who was the favourite to clinch the trophy, was outsmarted by the horse trained by Karthik Ganapathy when he made a quantum improvement to land the spoils. This was a terms race for three-year-olds and over held in Mumbai.

However, Bronx didn’t live up to expectations after failing to reproduce the Pune form and ended in a disappointing fourth.

La Rondine was in a better position than Bronx to have a bold show in the race which could be said to be helpful but couldn’t cross the finishing line before others.

Having not been in action in the whole of Pune season, Costa Brava participated in a race after a longish gap of 182 days with Leigh Roche and made a strong start to finish behind La Rondine.

While getting to the final turn, Raees moved up alongside Costa Brava but couldn’t keep up with the pace as the race picked up steam while La Rondine’s rider got busy in the stretch, helping the now favourite to overhaul the front-running Costa Brava with a furlong left in the race.

This was a surprise by Grand Accord who ran above expectations with a spirited run, which measured La Rondine in the waning yards of the race under the tutelage of jockey Bhawani Singh.

Recall that Grand Accord had lacklustre performances during his three runs at Pune. He will be excited to cross the finishing line first this time around to record the sixth win of his career in a graded race.

According to pundits, this was a surprise in a race of this nature, with horses of ability enjoying big pull in weights causing an upset.

In another development, Flaming Martini failed to live up to expectations again in the 1000 metres Shantidas Askuran Trophy, a race for horses rated 60 to 86.
The horse made a bad start after lacking the early speed needed to take a forward position and fell back to the rear.

Last start winner Sharareh gave speedy King Khalil who led the field until the final moments of the race and overhauled the long-time leader in the closing stage of the race to claim the top prize.

Kilkarry Bridge came the third ahead of Flaming Martini.