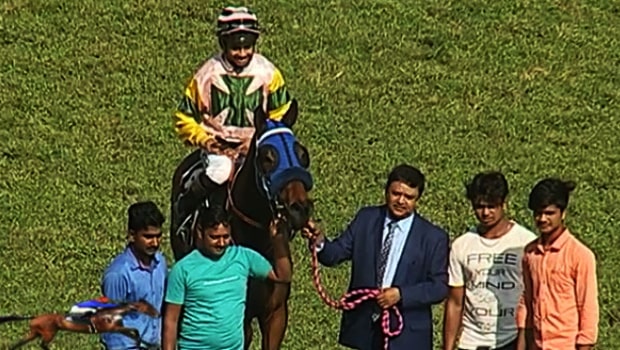 Hebron trained by J Sebastian with Yash Narredu has won the Jacqueline Plate 2020 at the Madras Race Clubridden, a race meant for horses rated between 20 to 25.

Jacqueline Plate is the main event of the races held on Wednesday. Mr. Vazhaparmbil J owns Hebron. Joseph and Mr. Blesson J. Kallada. He is trained by Sebastian, who saddled two more winners on the day.

Roses In My Dreams (P. Sai Kumar), the favourite for the race owned by Mr. M.A.M.R. Muthiah and trained R. Karthik was beaten to the top spot by Hebron in the 1800 meters action while Sifan (Zervan) occupied the third spot.

Before the race proper, Magnetism and Hebron were expected to fight out the finish of the Jacqueline Plate. Agnes (Umesh) came fourth.

In the other 1,800m for horse rated 60 to 85, Hebron also emerged winner crossing the finishing line ahead of Cotton Hall (B. Nikhil) and Queen Of Clubs (P. Sai Kumar) that emerged second and third respectively. He emerged the winner within one minute and 55.45 seconds.

Bring It On (Md. Asif Khan) came fourth in the four-horse race.
In another race, Daring Dancer trained by GS Parmar with S Zervan up won The Rotary International Cup Div 2 2020 at The Madras Race Club.

In the 1,200 meters race, meant for horses rated 20 to 45, Daring Dancer beat Glorious Flame ridden by Arshad Alam, who The Mysore Zoo Plate 2019 to the price, while Medovik jockeyed by Inderjeet Kumar came third.

In the race where the horse known as Glorious Fame is the favourite, he crossed the finishing line within one minute and 13.93 seconds. It is owned by Mr. Dhruv Kumar Futnani and Mr. Chirag D. Joshi while the trainer is Parmar.
Orange Pekoe ridden by Ayaz Khan came fourth.

In the Madras Race Club Equine Hospital Cup, a 1,200m race meant for horses rated 40 to 65, Md. Asif Khan took Glorious Champ to the finishing line ahead of Glorious Victory jockeyed by N. Murugan, Towns End (Farhan), and Areca Cruise (Umesh).
The horse emerged winner of the race within one minute and 12.85 seconds.