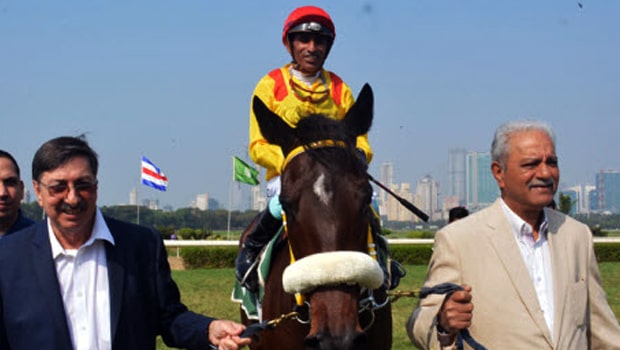 Judy blue eye didn’t disappoint with her favourite tag when he came from behind to win The Flying Brave Plate – a class four race meant for horses rated 20 to 46.

The four-year-old horse owned by Mr. Jaydev M Mody rep. J M Livestock Pvt Ltd overtook Falconette, who was leading the race in the thick of things but couldn’t continue the momentum with others leaving him to the fifth position.

Judy Blue Eyes then left Red Carnation by two and half-length with Julio Cesario getting the third position four and a half-length adrift the winner.

With the win, the horse jockeyed by P S Chouhan won the first prize of ₹.191250, while Red Carnation jockeyed by P S Kaviraj and Julio Cesaro jockeyed by J Chinoy shared ₹.82500 and ₹.52500  as second and third respectively.

In the Noble Opinion Plate, Jack Flash jockeyed by K Nazil emerged winner of all with a length behind Mr. Honey, which was usually called Tianjin Honey.

In class five 2000 meters race meant for horses rated 4 to 30, Hosidar Daji trained horse crossed the finishing line ahead of the favourite, Walk The Talk, who was 3.75 meters behind the winner.

Jockeyed by K Nazil, Jack Flash went home with the cash prize of ₹.153000 while Mr. Honey and Big Ben shared ₹.66000 and ₹.42000 after emerging second and third respectively.

Despite finishing fourth, Walk The Talk jockeyed by Santosh G got ₹.27000 while Silver Storm won ₹.12000  as fifth.

In the F K Trophy, another class four race meant for horses rated 20 to 46, Antarctica won a closely contested match finishing ahead of It’s A Deal jockeyed by Amyn Merchant and Hodson’s Horse.

P S Chouhan failed to guide the favourite Kalina to the finishing line ahead of others as the Nosher Cama trained seven-year-old horse finished last of all 14.25 meters behind the winner.

In the keenly contested race, Antarctica, trained by Altamash Ahmed, crossed the finishing line at 1:25:29. At the same time, It’s A Deal trained by Faisal A Abbas and Hodson’s Horse trained by Adhiraj S Jodha, followed with a finishing time of 1:25.36 and 1:25.42 respectively.