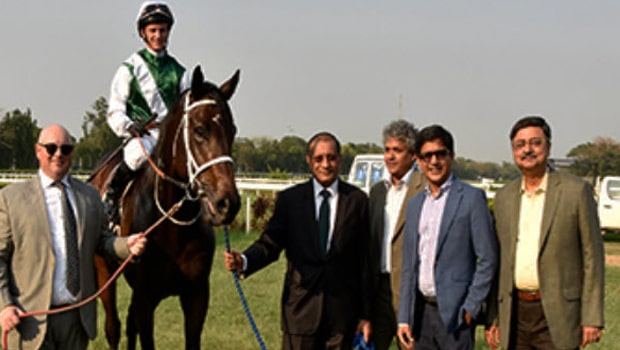 Trainer James Mckeown ensured that gritty, dark bay rig Trafalgar crossed the finishing line ahead of others to win the Calcutta Derby.

The tournament lived up to expectation as the grand finale was action-packed. Mckeown was at his best when it mattered most. This earned him the first blue riband of the season and a winner’s purse of Rs 51.6 lakh.

Trafalgar, which is owned by Joideep Datta Gupta and his syndicate, the son of Western Aristocrat out of Bluegrass Phenom, kept the threat of Tenno Sho and Trevor Patel at bay after pulling out all stops.

Jockey David Allan was also lauded for keeping his cool during the game to come out top.

Despite tending to hang out under pressure, Allan kept the horse’s mount on an even keel as Jaivant, who was followed by Inca and Streaming Gold,  set a moderate pace.

Trafalgar, who took the day, was handy for others to compete against when his heads turned for a home for the nail-biting climax that unfolded.

In an interview with Indiarce.com after the win,  Mckeown credited his team for a job well done and revealed that there was special equipment imported from England that helped the Trafalgar improve his gate manners.

As the horse was one of the first to enter the stalls,  the trainer his planning ahead to win the  Indian Derby in Mumbai.

On his part, Jockey David Allan said Trafalgar would surely improve further before the  Mumbai duel after running for the first time after a long break. He added that if the winner had been pacy, the game would have been easier, and the victory would be flawless.

Expressing his delight for naming his ward Trafalgar, the overjoyed sporting owner Joideep Datta Gupta revealed that the name came to his mind even before he purchased the horse.

The owner who revealed that yearling was bought while he was walking down Trafalgar Square in London said he decided that his next worthy purchase would bear the name Trafalgar after looking at Nelson’s column.

He also lauded James, who encouraged him to purchase the winner and advised him not to geld him fully.

The colt was having discomfort and pain due to one smaller testicle slipping inside. While noting that he may be retired to stud someday, but he is racing at the highest level for now.