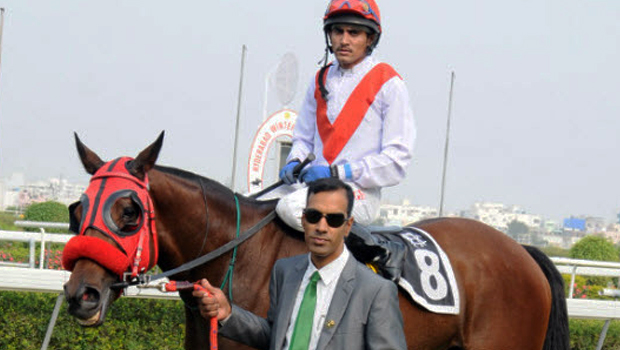 Ajit Singh has carved out an exciting victory in a four-horse finish.

Vancouver was in the lead coming into the straight and was galloping on to stay ahead as Big Bravebegan to work closer with Vijay’s Empire and Kingswood close behind.

A soon as Big Brave got close to the leader, Vijay’s Empire started to throw in his challenge, and Dandy Man got a rough passage, which was not an excuse as there were enough chances to take available gaps, but got in a rut.

As Sea Castle and NRI Heights finished with a good dash and in the end, Vijay’s Empire got the nod right to pip Brave Warrior on the post. NRI heights snatched the third place from Sea Castle this one too just on the wire.

In the other race, Hidden Hope won her debut race in division one of the RCTC Plate.

Hope in a race described as memorable, won with a measure of comfort, after sitting in the third spot until into the straight.

With Gopal Singh in the saddle, Hope produced a good pace inside the final two furlongs, after picking up speed with every stride to wear down long-time leader Lifetime with ease despite drifting out considerably in the final furlong.

The horse was way too fast for her opponent as she won by more than three lengths easily while Lifetime, who became second held while fast-finishing favourite Fashion Universe came third.

Another debutant, Days of Reckoning trained by D Netto, came out as a winner in the lower division of the race.

The debutant came out quickly and tagged just behind the leader, Beautiful Luv into the straight with Queen Daenerys close behind.

As soon as they got into the straight, Days of Reckoning pounced on the leader and dashing to pass the finish line first, skipping away from Beautiful Luv effortlessly.

Despite a challenge from Queen Daenery, the winner was too good and won handsomely, by finishing two lengths ahead of Queen Daenerys and Beautiful Luv, who managed to save place money.