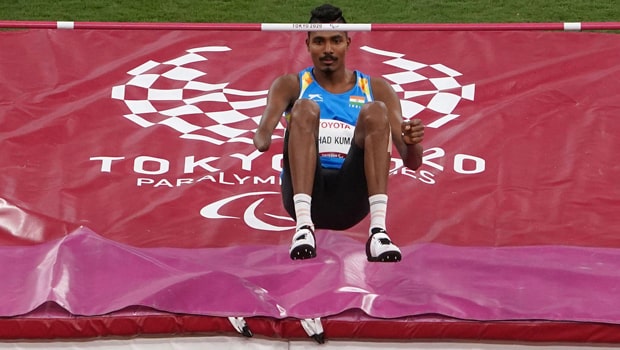 India have started the Tokyo Paralympics in style by winning medals. At first, it was Bhavina Patel who clinched the silver medal after losing the finals. Little later on Sunday, high jumper Nishad Kumar replicated her and won the silver medal. After winning the silver medal in the Paralympics he wishes that more para-athletes will be inspired by his performance and follow their passion.

“I am very happy after winning a silver medal at the Tokyo Paralympics. I want to thank the Sports Authority of India and the Prime Minister. I have gotten the desired support from everyone. PCI has always helped me, I am ecstatic after winning the medal,” Nishad told ANI.

“I hope this medal has made everyone proud and I hope it encourages more para-athletes to follow their passion,” he added.

Nishad was exceptional as he created a new Asian record of 2.06 m. He shared the second spot on the podium with United States’ Dallas Wise. The American also finished second but it took his two attempts to match Nishad.

However, he then spoke to NDTV news and revealed how he will tell his father to stop his daily wage work. “My father is still a daily-wage worker. First of all, I will ask him to stop doing that. I will tell him to stay at home with the family. I will also try to fulfil all my mother’s wishes,” he said.

“My parents have always fulfilled my wishes, even after so many difficulties, never made me feel that there is a shortage of money,” Nishad added.

Nishad, who lost his hand in an accident, was always supported by his parents to pursue sports. Therefore he credits them for his achievement at the Paralympics.

Nishad also points out how technical an event like the high jump is and how much effort he has put in to reach this level. He thanked his coach Satyanarayana for his constant support and hard work in correcting every movement.

“My journey wasn’t easy. It’s a very technical event. To learn it itself very difficult; you make mistakes and you have to work on it, Nishad said about his career.

“(My coach) Satyanarayana sir worked on every movement of mine; that is why I managed to jump so high,” he said.