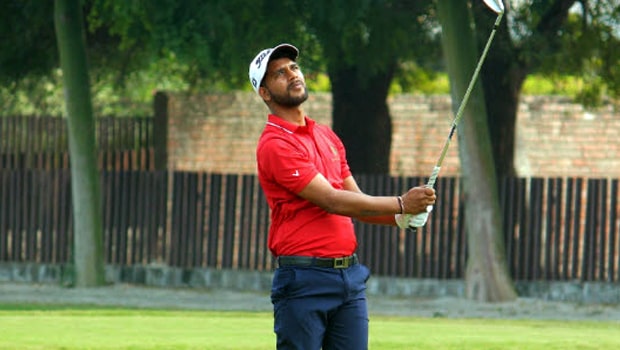 Indian golfer, Vinay Kumar Yadav, is sharing the lead with Keshav Mishra and Tinku Badliya in the first round of the ongoing PGTI’s Pre Qualifying II for the 2020 season at the Kensville Golf & Country Club near Ahmedabad.

Yadav emerged top of the log after making five birdies and three bogeys during his opening round. At the same time, Tinku Badliya struck four birdies and two bogeys, and Keshav Mishra added three birdies and a lone bogey to his credit.

Occupying the fourth place are Anshul Patel and Imran Ali Mollah at one-under-71.

Yudhvir Munjal, who is based in Panchkula, made a hole-in-one on the 11th during his round of 81 to place tie at 54th.

The top 24 players (+ ties) will qualify from Pre Qualifying II, a 36-hole event, for the Final Qualifying Stage Out of a total field of 88.

It could be recalled that Zubin Nijhawan and Akash Modi took the top spots in Pre Qualifying I, as 28 players qualified for the Final Stage.

Zubin Nijhawan, who is based in Panchkula (70-72) and Akash Modi (71-71), also emerged winners of round two of the PGTI’s Pre Qualifying I for the 2020 season. The duo took the day after topping the leaderboard with totals of two-under-142.

28 players get the ticket to the Final Qualifying Stage with three players tied in 26th position when the cut was declared at eight-over-152 from a total field of 98 in Pre Qualifying I.

Nijhawan, who became the overnight joint leader, maintained the lead on day two, sinking four birdies in exchange for a bogey and a triple-bogey.

Lying overnight third and one shot off the lead, Modi had made two birdies and a bogey to move into joint first place while Pankaj Maandiya (74-70) finished third at even-par-144.