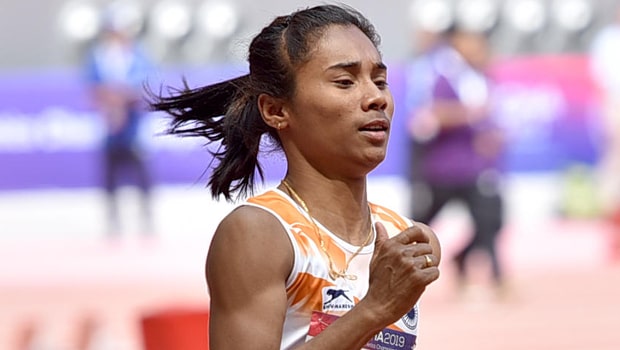 There was a lot of buzz around sprinter Hima das when she first burst onto the scene. People thought that we have finally got someone who will win us medals in the  Athletics division at the Olympics. However unfortunately Hima das won’t be able to take part in the Olympics after she suffered an untimely injury.

The Assam based sprinter pulled her muscle while competing in the 100m heats on the second day 60th National Senior Inter-State Athletics Championships held in Patiala. The young sprinter a few days ago in the same event was exceptional for the 4x100m relay team event as they set a new record.

Looking at her condition Hima was forcefully pulled out of the 100m final and the 4x100m  relay finals. She got to run at the 200m finals and finished way behind the medal bracket.  It is a huge blow for the athlete, for the fans and India as a whole. Hima das was one of the budding sensations and even if she had not won a medal her experience of visiting the Olympic valley and soaking in that pressure would have been a great help for the young sprinter who will look to keep no stone unturned at the next Summer Games.

She has jotted down her thoughts on twitter sharing how heartbreaking this whole issue is to her. However she still thanked her coaches, staff and teammates for their support. Lastly she assures that she will make a strong comeback at the Commonwealth Games in 2022 along with the Asian Games and the World Championships all scheduled next year.

“I will miss my first Olympics due to an untimely injury when I was close to achieving the qualification standard in my new events 100m and 200m,” Hima tweeted on Tuesday. “I would like to thank my coaches, support staff and my teammates for their continuous support.

“But I will make a strong comeback and am looking forward to Commonwealth Games 2022, Asian Games 2022 and World Championship 2022,” she concluded.