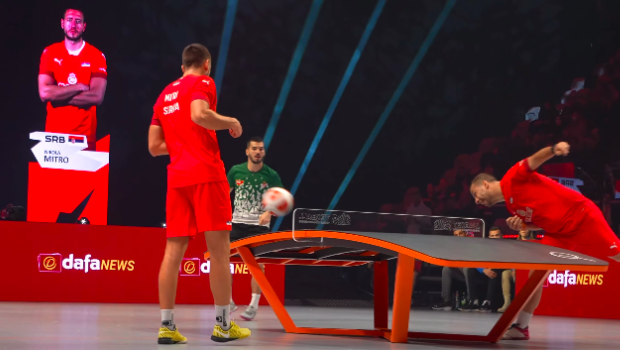 Teqball – All the rules you need to know about the game

Teqball is rapidly becoming a worldwide sport and its popularity has been on the rise since its inception back in 2014. FITEQ was founded in 2017 and there are a total of 124 national countries associated with the federation.

We have seen many football players warm up through Teqball to get their juices going before the match. With the Teqball championships going on, we have brought the set of rules with which the game is played.

Understanding the rules of Teqball:

Teqball can be played with balls used in football, with size five being official and recommended.

Teqball can be played by two players (singles game) or by four players (doubles game).

A Teqball match consists of best-of-three sets, which is played on a curved table.

Each set is played until a player/team reaches 12 points.

Every player/team has two attempts to complete a successful service.

The players/teams change service after each four points.

It is forbidden to touch the ball with the same body part twice consecutively.

It is forbidden to return the ball with the same body part twice consecutively.

Every player/team is allowed to return the ball with a maximum of 3 touches by any body part, except for the hands and arms.

In doubles, a team has a maximum of 3 touches, however, the teammates must pass the ball at least once to each other.

While playing, neither the table nor the opponent can be touched.

In the case of an edge ball, the rally shall be repeated. An edge ball happens when the ball catches the edge of the curved table.

The Teqball court measures a minimum of 12*16 meters. The sport can be played either outdoors or indoors.

Two attempts are given for accurate service. Change of service occurs after every four points.

Players are not allowed to return the ball past the halfway line. However, they can play it back to their teammate or themselves from any position on the court within the same number of touches allowed.

When the returning player leaning body part on the point of touch with the ball crosses the extended imaginary line of the net at the moment of the return, it is deemed as an illegal attack.