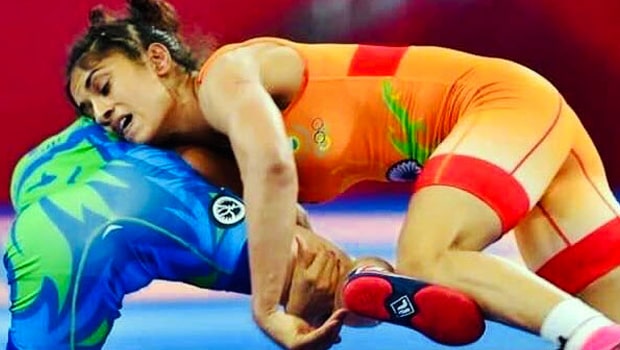 Indian Star Wrestler Sakshi Malik has backed Vinesh Phogat to win medals at the Tokyo 2020 Olympics despite her lack of ability to win medals in the last Olympics at Rio, in Brazil.

India has so far secured four spots in wrestling for the 2020 Olympic Games in Tokyo. The wrestlers who have clinched their places for the quadrennial tournament in different categories are Deepak Punia [Men’s 86kg], Vinesh Phogat[ Women’s 53kg], Bajrang Punia[Men’s 65] kg, and Ravi Dahiya [ Men’s 57kg].

Aside from these selected four youngsters, Sakshi Malik is the only Olympic medal-winning female amongst them, and she is also confident of making it to the Tokyo Olympics.

Sakshi, who won a bronze medal in the 58kg category back in the 2016 Rio Olympics, wants to win a different color medal if she finally makes it Tokyo this year. She is looking forward to competing in the 62kg category.

Sakshi, an ASICS brand athlete who won a gold medal at the South Asian Games in Nepal in December 2019, revealed in an exclusive interview.

The 27-year old appreciated the audience and related her experience at the South Asian Games, saying, “irrespective of the size of the competition, I have always had something to learn.”

“ my training ahead of the Tokyo 2020 gamed has been intense and been in top gear, even though I still have to pass through the qualification round.”.

Sakshi could not qualify in the World qualifications round, and she has been working hard and made some amendments to her mistakes. Her aim now is solely to be eligible for the Asian qualifications and make it to Tokyo to realize her dream of winning a gold medal.

Sakshi also backs her fellow wrestler Vinesh Phogat to win medals when she finally gets the chance to represent India in Tokyo as they will be united as one.