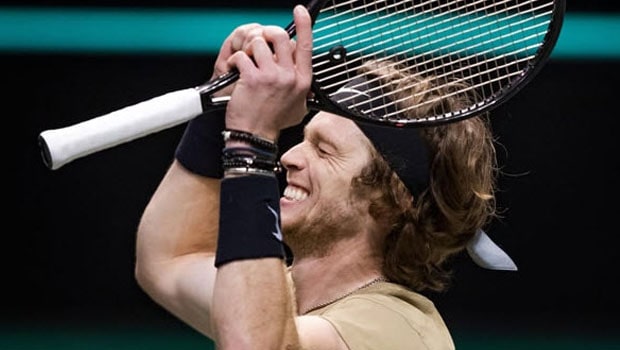 World No. 8 Andrey Rublev is taking giant strides in the Tennis World. The 23-year old Russian has shown the skills to go a long way in his career and he is taking the right steps in his career. Thus, Rublev has hogged the limelight in the recent past with his impressive performances.

Rublev recently won the Rotterdam Open as he had defeated Marton Fucsovics by 7-6(4), 6-4 in the final. It was the 20th consecutive win for Rublev at the ATP 500 events whereas it was the seventh win on the bounce in ATP tour championships.

Meanwhile, the World No. 4 and US Open champion Dominic Thiem has heaped praise on Andrey Rublev for his consistency. Thiem has rated Rublev as one of the top three players in the world.

In fact, Rublev has defeated Thiem in the last three outings and the Austrian will aim to get his revenge against the Russian as both of them will lock horns against one another in an exhibition match at Mexico later in the year.

Speaking highly of Andrey, Dominic stated, “He is one of the three best players in the world right now. He’s on an unbelievable streak, he’s already won Rotterdam, already won a title. I’ve lost the last three matches against him on Tour. Well, maybe I’ll get my revenge before our match in Mexico. But if not, hopefully, I can get my revenge there.”

Before savouring success at the Rotterdam Open, Rublev had played a key role in helping Russia lift their maiden ATP Cup, which took place before the Australian Open.