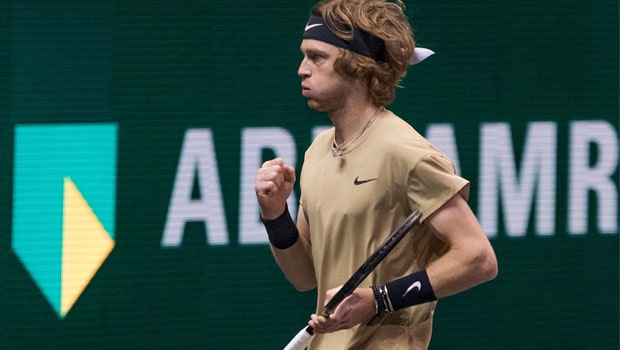 World No. 8 Andrey Rublev has impressed with his talent in the recent past. Rublev recently won the Rotterdam Open as he had defeated Marton Fucsovics by 7-6(4), 6-4 in the final. It was the 20th consecutive win for Rublev at the ATP 500 events whereas it was the seventh win on the bounce in ATP tour championships.

The youngster has shown the skills to go a long way in his career and he is doing a fine job. On the other hand, Dominic Thiem clinched his maiden slam title by winning the 2020 US Open. Thiem has shown to the newer generation that it is possible to defeat the Big Three at the top level.

Meanwhile, both Rublev and Thiem share a mutual respect for each other. Recently, Thiem stated that the Russian is one of the top three players in the world and Rublev has now returned the favour by praising the Austrian.

Rublev said that Thiem will always try and share energy when he is training with him. The 23-year old from Russia feels Thiem always gives more than his cent percent in the training sessions, which is the key to his success.

“Dominic is generally a kind and cool guy, very simple. It is always a pleasure to train with him because he is hardworking, the classes are intense. It doesn’t matter how he feels, whether he is in the mood – in training, he will always try and share energy. Therefore, we have professional respect for each other.”

Albeit Rublev revealed that both of them hardly communicate off the court but they share a good bonhomie when they are training together.

He said, “Outside tennis, we hardly see each other, we communicate well and help each other out. Now he forgot something in Doha, and I took it to him in Dubai.”

Meanwhile, Dominic Thiem decided to withdraw from the ongoing Miami Open whereas Rublev will play Marin Čilić in the round of 16.