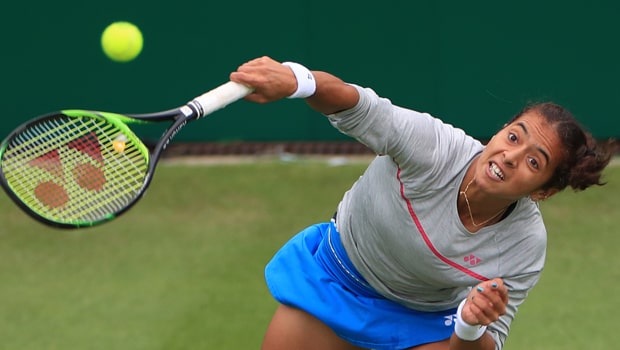 India’s number one single women tennis player, Ankita Raina has won her first ITF singles title of the season, beating Chloe Paquet in the final of the $25000 event in Nonthaburi, Thailand on Sunday.

Raina who was seeded third for the tournament won her tenth title after a 6-3, 7-5 win over the fourth player, ranked places below her at 178.

It was double joy for Raina as also won the doubles title with Dutch partner Bibiane Schoofs.

Raina who had lost her two encounters against the French has been a good form this season after making it to the last four at another USD 25000 event in Canberra.

With the fixture, India’s best singles players will try to use the home advantage as a veteran player, Leander Paes will be seen in action for one last time.

On the other hand, left-handed Prajnesh Gunneswaran will also be up against Yannick Maden, ranked 125 in the world.

Troicki, who had been in sensational form, leading Serbia to ATP triumph partnering Novak Djokovic entered the main draw after a comfortable 6-2, 6-4 win over Russia’s Evgeny Karlovskiy in the final qualifying round on Sunday.

With Ramkumar Ramanathan, Sasi Mukund and Arjun Kadhe given wild cards, five Indians will be participating in the tournament.

Ramkumar will begin action today against seventh seed Italian Salvatore Caruso, while  Paes will be playing for the last time in Pune alongside his Australian partner Mathew Ebden, as his participation in the Bengaluru Open looks unlikely.

Sunder Iyer, Secretary of Maharashtra State Lawn Tennis Association (MSLTA), described this year’s edition as unique in more than one way, as they are celebrating 25 years of the tournament in India and tennis fans will have the last chance to watch Leander play live in Pune.

Other players who progressed to the main round are Nikola Milojevic, Roberto Marcora and Lucas Rosol after winning their respective final round match in the qualifiers of the ATP 250 event.