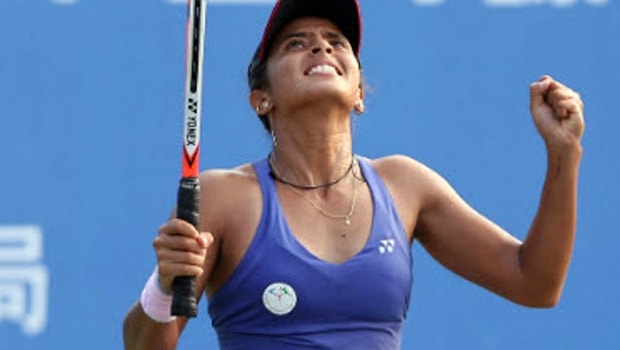 Rising Indian tennis star and Asian Games medal winner, Ankita Raina, alongside her male counterpart, Divij Sharan are set for nomination for the Arjuna award by the National Tennis Federation.

The All India Tennis Association (AITA) is reportedly planning to send the name of former Davis Cup coach Nandan Bal’s name for the Dhyan Chand honour as well.

Ankita had experienced a rise in her ranking after winning a bronze medal in the women singles at the 2018 edition of the Asian Games. She continued from where she left off with a scintillating performance in the Fed Cup, where she helped India qualify to the World Group play-offs for the first time.

Ankita road to stardom began in the 2018 Fed Cup, where she didn’t lose a single game in the singles. She is currently India’s best singles player on the WTA and ITF circuit, after achieving a career-best singles rank of 160 in March this year.

During Fed Cup, Ankita played eight matches and won two singles and three crucial doubles games when she partnered with the Indian veteran, Sania Mirza, to help India qualify for the playoffs for the first time.

Sharan, who is based in India’s capital, Delhi, was a gold medalist in the men’s doubles event in Jakarta with his fellow countrymen, Rohan Bopanna. He initially dislodged Bopann as India’s top doubles player in October 2019 before the experienced lad regain the position.

Also, in Sharan’s locker are two ATP titles in the 2019 season, which are Tata Open Maharashtra won in Pune with Bopanna and at St. Petersburg Open with Igor Zelenay.

Speaking on the development in an interview with PTI, AITA Secretary General Hironmoy Chatterjee said the duo are eligible and most deserving of the honour this year, adding that they will be recommended for nomination.

Speaking further, Chatterjee said AITA is still deliberating whether Bal’s application will be sent for the Dronacharya award or Dhyan Chand award. The later is meant to honour lifetime contributions.