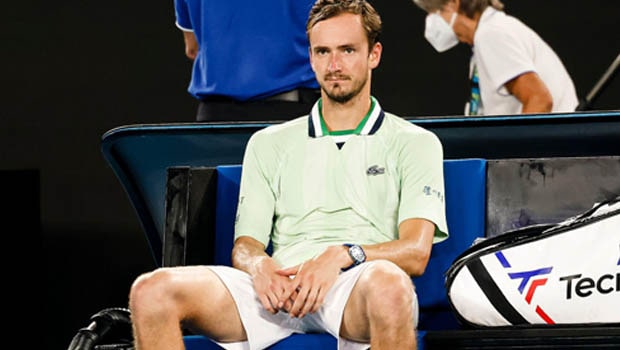 Daniil Medvedev to climb to ATP no.1 rank after Djokovic losses to Jiri Vesely

Russia’s Daniil Medvedev will take the numero uno position in the ATP rankings on Monday after Novak Djokovic lost to Jiri Vesely in straight sets in the ongoing Dubai Tennis Championship. Medvedev, on the other hand, defeated Japan’s Yoshihito Nishioka in straight sets in the quarterfinal of the Mexican Open, to set up up another clash with Rafael Nadal, whom he had recently met in the Australian Open.

Thus, Djokovic’s reign at the summit position will end after a long period of 361 weeks, which is the most for any Tennis player. In fact, Medvedev becomes the first player out of the Big four – Novak Djokovic, Andy Murray, Roger Federer, and Rafael Nadal to take the top position in the rankings since 2004.

Meanwhile, the Russian has been a consistent performer in the last couple of years. He won the US Open by beating Novak Djokovic in straight sets but could not cross the final hurdle against Rafael Nadal in the Australian Open final.

Vesely said it is an amazing moment for him after he defeated the Serbian for the second time.

“It’s an amazing feeling,”  Vesely said in his post-match interview. “I never thought I would really have a chance against Novak [Djokovic]. “I mean he’s really one of the greatest of all time, if not the best. “After the last 12 months I’ve gone through it’s unbelievable. “I have so many emotions inside, it’s hard to describe, it’s just an amazing feeling.”

“It’s great for tennis to have somebody new at world number one again,” Vesely said of the historic moment. “We all know Novak missed the Australian Open but he’s such a champion, been world number one for 361 weeks. “Tennis needs new number ones with new generations coming up. I think it’s just great.”

On the other hand, Djokovic also congratulated Daniil Medvedev for reaching the number one rank and said he thoroughly deserves it.