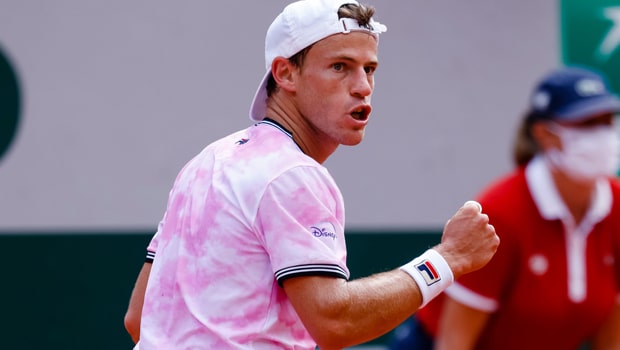 Roger Federer over the years has impacted a lot of people with his sensational tennis. His persona on and off the court makes him one of the most likeable characters. Reiterating that Argentinian tennis star Diego Schwartzman recently praised the Swiss great in his interview appearance with ESPN.

The current World No. 13 highlighted Federer’s attitude on and off the court and according to him, the 34-year-old is one of the friendliest people in the tennis circuit.

However, once he is on the court competing his attitude changes. He is more competitive and he leaves no hope for his opponents.

“Roger is a gentleman, he’s perfect on the pitch, but on the outside he’s even more perfect,” Schwartzman said. “In the players’ room joking around with everyone and being close to everyone, that’s impressive. But on the court, he makes you feel like you have no idea what to do with him.”

The Argentine then spoke about Federer’s sublime style of play and pointed out how the Swiss has outplayed him several times even when he thought he was playing at his best.

According to Schwartzman Federer’s variety in shot selection makes him a very dangerous prospect in tennis history.

“I had times in my games with him where I felt good playing, and it seemed like he was bored and was going to beat me whenever he wanted,” Schwartzman said. “He has to be the one with the most variations and tennis repertoire in history.”

The 29-year-old admitted that he could watch Federer play forever and wishes that the Swiss great comeback with a bang after his recovery.

“I hope he never retires,” Schwartzman said. “I mean, really. Let him play in a suit if necessary.”

The Argentine’s opinion on Federer was enough to make you understand how good the Swiss superstar is in the tennis circuit. Schwartzman has faced Federer four times in his career but not once did he manage to get the better out of the legend.

In fact, Schwartzman has won only one set ever in his career against Federer in a match at the Indian Wells back in 2015. Their last meeting happened back in 2017 at the Shanghai Masters which Federer won with relative ease.

Diego Schwartzman is currently preparing for his ATP Cup challenge. He has matches against Hubert Hurkacz, Nikoloz Basilashvili and Stefanos Tsitsipas in the group stages.