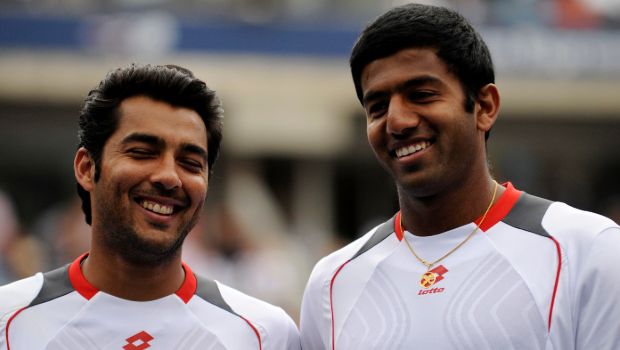 Indian tennis players, Divij Sharan and Rohan Bopanna will partner with each other at the upcoming edition of the Tata Open as they have paired up with different partners. The duo were last year’s doubles champions.

The event is the only Indian ATP250 event. Sharan will be playing alongside Kiwi player Artem Sitak.

Bopanna won’t get into the main draw after teaming up with local boy Arjun Kadhe, whose doubles ranking is 217. This has left put the duo on the alternate list.
Also waiting to confirm his place in the main draw is legendary Leander Paes (119) after entering the event with Australian Matthew Ebden (122).

According to reports, the participation of former Grand Slam doubles champions, Robert Lindstedt and Jonathan Erlich will bring huge attraction to the doubles event of the tournament, which begins at Balewadi Stadium from February 3.

It could be recalled that the Swedish ace who won the Australian Open doubles title in 2014 and also featured in the Wimbledon final in 2010, 2011, and 2012 editions. Lindstedt will partner Netherlands’, Robin Haase.

Following his triumph in the 2018 edition with compatriot Matwe Middelkoop, Haas, who is number 34 in the world ranking, is a familiar name in the tournament.
On the other hand, Erlich, who is ranked 67 Erlich, will play with Belarusian Andrei Vasilevski.

Speaking ahead of the tournament, Sunder Iyer, secretary of MSLTA, said there is a competitive field in the third edition of the competition, and the organisers expect another year of high-quality action with the presence of the world’s top tennis players.

Meanwhile, another Indian single tennis top player, Prajnesh Gunneswaran, won’t be able to meet grad slam champion, Novak Djokovic, after he was ousted in the opening round of Australian Open on Tuesday.

Prajnesh, who is ranked 122 in the world, entered the main draw as a lucky loser in the qualifiers. He lost in straight sets 6-4 6-2 7-5 against Japanese wild card Tatsuma Ito, who is ranked 22 places below him.

The rescheduled first-round tie lasted two hours and one minute.