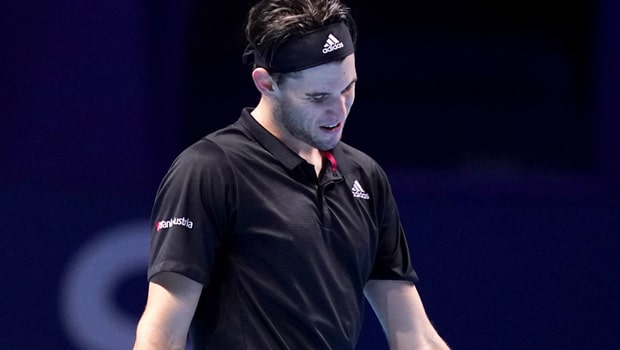 The Austrian Dominic Thiem was on fire in the semi-final match against World No. 1 Novak Djokovic in the ATP World Tour finals in London. Thiem clinched the first set after breaking Djokovic’s serve in the 11th game and then he was able to hold his serve to win the first set by 7-5.

Djokovic had Thiem on the ropes as he was leading 4-0 in the tiebreaker but the Austrian made a roaring comeback. Thus, Thiem won the match by 7-5, 6-7, 7-6 to book his finals berth.

After winning the game, Thiem joined Andy Murray in elite record. Thiem is now only the second player to win at least five matches against the Big Three – Roger Federer, Rafael Nadal and Novak Djokovic. Thiem head to head record against these legends is 5-2 vs Federer, 6-9 vs Nadal, 5-7 vs Djokovic.

Thiem revealed he had the rub of the green on his side as everything he tried turned to gold when he was 0-4 down in the tiebreaker of the third set.

“I got a little bit lucky in the third set tiebreak. It’s so much on the edge, from 0-4 in the tiebreak I went for every single shot and every single shot went in. It was amazing,” said the US Open 2020 winner.

In fact, the talented youngster dropped four match points in the second set but finally got over the line.

Thiem will lock horns against Daniil Medvedev, who defeated Rafael Nadal in the second semi-final, in the final of the ATP Tour finals.