Home » Tennis » I am as motivated as ever, winning Calendar slam is going to be mentally challenging: Novak Djokovic

I am as motivated as ever, winning Calendar slam is going to be mentally challenging: Novak Djokovic 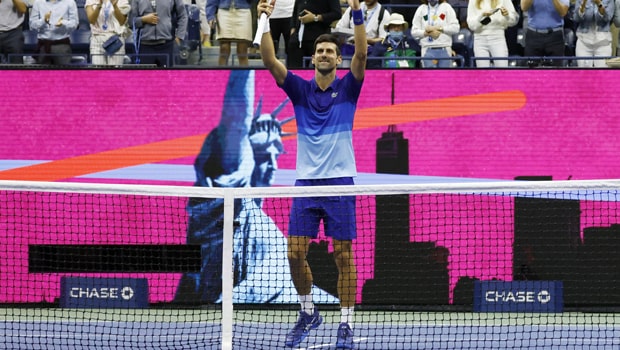 The World no.1 Novak Djokovic is five matches away from creating history. The Serbian is chasing the Calendar slam, which no Men’s Tennis player has achieved in the last 52 years. Djokovic has won the first three majors of the ongoing ATP tour and if goes all the way in the US Open, he will join Don Budge and Rod Laver in the elite company.

Djokovic stated that he is as motivated as ever to win US Open and admitted it is going to be mentally challenging for him to clinch the Calendar slam. The talisman feels he is physically ready but he needs to keep his emotions in check.

Djokovic won his second-round match against Tallon Griekspoor in straight sets as he won by 6-2, 6-3, 6-2 and advanced to the third round at the Flushing Meadows.

“Probably it’s more mental and emotional, really,” Djokovic said when asked about the biggest difficulty in achieving the calendar slam. “Physically, I feel great. I can go a couple of hours every day. I don’t mind being on the court for a long time. “Actually the longer the match goes, I feel I have more chances to win against anybody in best of five.

“So it’s really more about handling everything that is happening off the court, all the expectations. “But as I’ve said, [it’s] trying to take it moment by moment, really stay in the present moment, and get the most out of it. “I’m as motivated as ever to do well. I’m not the only player who wants to go deep in the tournament. “Hopefully, [I’ll] get my hands on the trophy. That’s why I’m here. I’m trying to be the best I can be every single day. Let’s see what happens.”

Djokovic has been in top form and he would look to continue the good show. It won’t be easy for the next generation of players to stop Djokovic if he plays at the top of his game. Djokovic will face Kei Nishikori in the third round of the US Open. The Serbian has a 17-2 advantage against the Japanese.