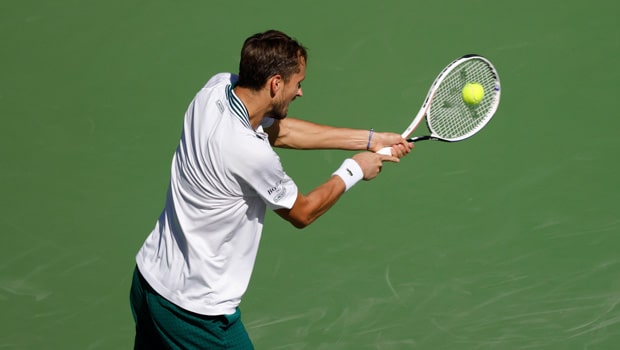 The US Open champion Daniil Medvedev reckons it is not the end of the world after he lost to Grigor Dimitrov by 4-6, 6-4, 6-3 in the fourth round of BNP Paribas Open at Indian Wells. The Russian also predicted that he doesn’t see Dimitrov losing in the tournament if he is able to keep the same level of Tennis in the coming rounds.

In fact, World no.2 was leading by a set and a double break against the Bulgarian but could not grab his opportunity. Dimitrov made a stunning comeback as he broke Medvedev’s serve in consecutive four games and took his game to another level.

Medvedev admitted that Dimitrov played the second half of the game in the fourth round better than anyone in the US Open, where he dropped only a single set throughout the tournament.

Medvedev said: “100 per cent. If I would lose the US Open final, maybe [I] would have been a little bit tough on myself. “But I do think I see kind of the reasons why this happened. Grigor played [the] second part of the match better than anybody did against me [at the] US Open that I won. Playing this level, I don’t see him losing to anybody, but let’s see the result.

“I don’t see [it as the] end of the world this match. I’m definitely going to just continue working for the next one and just try to be better next time, because, Indian Wells, I really like the place, so I want to try to do better one day.”

Medvedev has been formidable on hard courts and he has hardly lost four service games in the recent past. The Russian added that the conditions got slow, which worked against him.

“I don’t remember myself losing three service games, even four service games ever, I guess, on hard courts,” Medvedev said.

“That shows how slow this court is and the conditions, more like clay, I would say, which I don’t like, because to lose serve four times is just unacceptable. I knew that during the day, [it is] much tougher to control the ball for me, especially on the serve.“

Medvedev will now be seen in Nitto ATP Finals, which will be played in Turin from November 14.