Home » Tennis » I hope I can get to World No.1 one day: Stefanos Tsitsipas

I hope I can get to World No.1 one day: Stefanos Tsitsipas 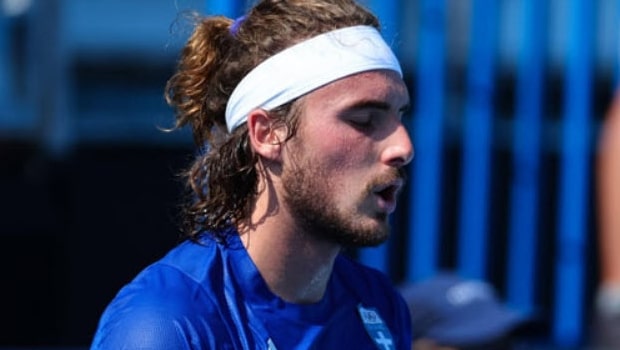 World No.3 Stefanos Tsitsipas aspires to be the World no.1 one day in the ATP Rankings. Tsitsipas recently leapfrogged Rafael Nadal from the number three spot but getting to number one is not going to be easy for him.

Novak Djokovic currently occupies the numero uno position in the ATP rankings with a total of 12113 points whereas Tsitsipas has a total of 8350 points under his belt. Thus, there is almost a difference of four thousand points between Djokovic and Tsitsipas.

Meanwhile, Tsitsipas has impressed in his young career and has shown the skills to go a long way in his career. The Greek sensation has a potent forehand but recently lost in the semifinal of the National Bank Open against Reilly Opelka.

Tsitsipas had made it to the final of the French Open but could not go past Novak Djokovic despite being two sets up. Thus, the Greek youngster is yet to win his first Grand slam title.

“My top priority is getting far into tournaments and playing good tennis,” said Tsitsipas. “I have said it: I’m not aiming for titles, I’m not aiming to go and win every single one of them.” “Obviously I will be very happy if something extremely good comes out of it, I won’t say no to that, and I will work towards that. But the starting point is where the big points are.”

Tsitsipas admitted that he has worked hard to achieve the no. 3 rankings and he wants to keep pushing himself in the upcoming tournaments.

“No. 3 is a number that is very significant and definitely adds some value to the efforts you put in recently to get there,” Tsitsipas said. “It kind of pushes me to sustain that, to want to go the extra mile in the next tournaments.”

The 23-year old youngster is hopeful of becoming the World No.1 some day.

“That was my initial goal from the beginning of the year, to make it into the top three,” he added. “Now the second phase of that goal is to remain there and consistently add points week in and week out and have it close that way at the end of the year. I think that the very next step would be the No. 1 spot, which I hope I can get to one day.”