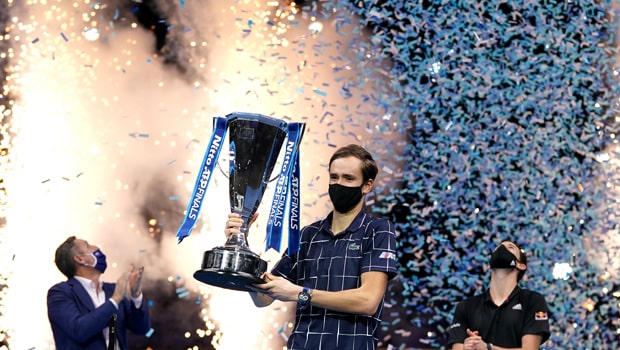 Russia’s Daniil Medvedev has been in sublime form in the recent past. The lanky Russian recently won the Paris Masters and continued his prolific form in the ATP World Tour Finals, which was the final event of the year. Medvedev defeated players like Alexander Zverev, Novak Djokovic, Diego Schwartzman and Rafael Nadal to set up the final against Dominic Thiem.

Medvedev lost the first set in the final against Thiem and he was on the backfoot. The second set went into the tiebreaker and the 24-year old Russian was able to clinch it by 7-2. The World No. 4 then sealed the deciding set by 6-4 to win his maiden ATP Tour finals. The Russain won by won 4-6, 7-6 (7-2), 6-4 and admitted that it was the toughest victory of his career.

Medvedev said, “It was the toughest victory in my life because Dominic is a really tough player to play. Today, he was at his best… That’s what I felt during the match. He was really close to winning it [in the] second set. I managed to stay there. I felt in the third set that I was really tired physically, for sure, but I felt like he started to miss some balls, he started to run a little bit slower because he was tired.”

On the other hand, Medvedev had made the cut into six consecutive finals in 2019 but he has been able to convert two in two in this year. The Russian added that Thiem is one of the best players in the history of the sport and to make him tire in a three-setter was a great achievement.

Russian continued, “To make Dominic tired in a three-set match, not a five-set, I think is a great achievement. All these small things, Dominic is playing as [of] today [as] one of the best players in the history [of the sport], not yet maybe by the titles and Grand Slams, but as I say, playing [with the form of] today.”

Medvedev will look to continue the good show in the next season and he will aim to clinch more singles titles.

Meanwhile, the next ATP World Tour finals will be hosted by Turin, Italy. London hosted the event for the last 12 years.