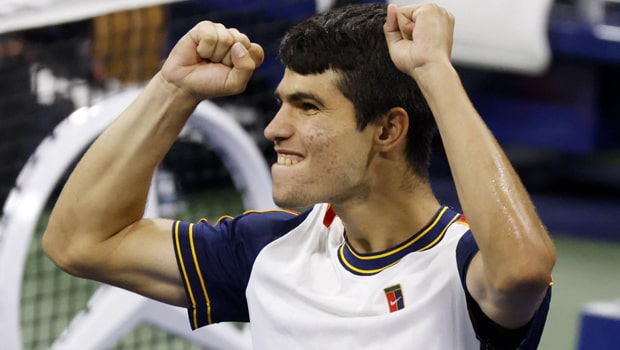 Spain’s Carlos Alcaraz, the 18-year old has written his name in the history books. The Spaniard has become the youngest ever to qualify for the quarterfinal of the US Open. The youngster defeated Germany’s Peter Gojowczyk by 5-7, 6-1, 5-7, 6-2, 6-0 in the fourth round of the tournament.

The prodigy player is delighted to enter his first second week of a Grand slam and it has been a dream come true for him. Alcaraz, who has shown the skills to go a long way in his career, has been likened with the likes of Roger Federer and Rafael Nadal.

The Spaniard smashed 45 winners and won a total of 161 points as compared to 130 by the German.

“I’m super excited to be in my first second week in the Grand Slam, so it’s amazing for me. It’s a dream come true,” Alcaraz said. “It’s really tough to play these kinds of matches, to play fifth sets… I hope to play more second weeks, to play more quarter-finals of Grand Slams. I didn’t expect to play quarter-finals here. So I think it’s a really good performance from me in these matches.”

Alcaraz lost the first set by 5-7 despite having two double break and admitted that it was a tough opening set for him. The youngster added that the crowd played a key role in lifting him after he lost the opening set.

“In the first sets I thought that I reached my limit, physically and mentally. I think the crowd was really, really important for me in this situation,” Alcaraz said. “I felt the energy of the crowd pushing me up. I think without the crowd, it couldn’t be possible to be here.”

Alcaraz will face 12the seed Felix Auger-Aliassime in the quarterfinal.