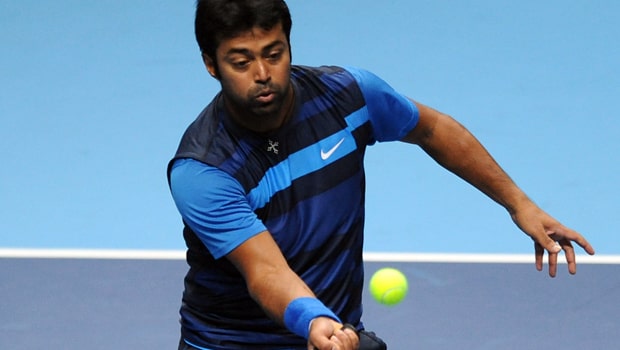 India’s top tennis player, Leander Paes has hinted at possible retirement.
The veteran said he has been relying on his experience to outsmart opponents said he is not looking to playing for more than a year.

Paes was drafted into the team for the Davis Cup clash against Pakistan after several top players opted out of travelling Islamabad due to political differences between the two countries.

He didn’t disappoint when he was called upon by surpassing his record, winning his 44th Davis Cup doubles win courtesy of India’s 4-0 win over their opponent in Nur-Sultan, Kazaktastan

Speaking with reporters after the gain, he said the country ought to have started nurturing a new, young team which should be the main objective of the Indian tennis authority at the moment.

The 46-year-old veteran further said his experience has been handy carrying him till the moment but won’t be able to feature for the team again beyond next year.
Paes, who is also the Olympic bronze medallist noted that at the age of 46, the next generation ought to have moved him out of the game.

Recall that India had on Sunday quickly wrapped up the formalities sweeping Pakistan in the Davis Cup Asia-Oceania Group 1 tie in Nur-Sultan.

They have therefore progressed to the World Group Qualifying round to meet Croatia slated for March 6-7.

Paes, who returned to the India team after 18 months absence and his double partner, Jeevan Nedunchezhiyan, who was also making his debut within 52 minutes dispatched Pakistan’s twin 17-year-olds, Muhammad Shoaib and Huzaifa Abdul Rehman, 6-1, 6-3 to seal the victory.

With doubles win recorded by the 46-year-old veteran in the capital city of Kazakhstan, it means Paes has now tied Spain’s Manuel Santana for fourth place in the all-time list of overall wins. He has a record of 92-35 while Santana has 92-38 with Italian Nicola Pietrangeli on top of the chart at 120-44.

Speaking on playing alongside Jeevan, he said his partner got everything right from the onset.

Having known the young player for a long time, Praes described him as a player with a big heart who always loves to play for his country and put his best.