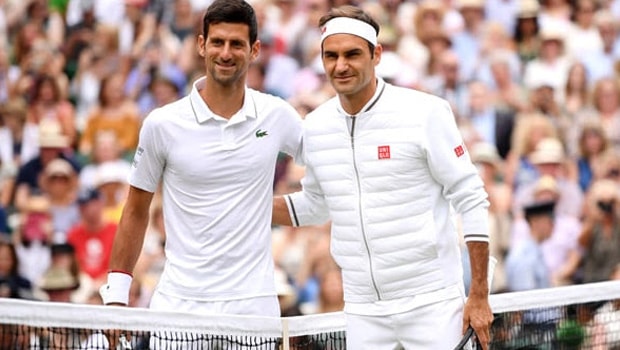 There have been many enthralling rivalries in Tennis over the years. From John McEnroe and Jimmy Connors to Pete Sampras-Andre Agassi, we have seen some really hot contests. In the modern era, the rivalry between the Big Three – Roger Federer, Novak Djokovic and Rafael Nadal have given goosebumps to the fans all over the world.

The rivalry between Novak Djokovic and Roger Federer is one of the best in the game. The duo have played 50 matches against each other and Djokovic has his wood on Federer as he has won 27 games whereas the Swiss maestro has won 23 matches. Djokovic leads 13-6 in all final matches and the Serbian also leads by 11-6 in Grand slam matches.

Both the champions have shed light on their gripping rivalry. Djokovic stated that their rivalry goes beyond the sport and it is always a thrilling experience to play against Federer.

Djokovic said in the recent episode of ATP Uncovered, “I’ve played so many thrilling matches with him over the years. Every time I step on court against him it’s thrilling, it’s very exciting because it kind of exceeds that match. It goes beyond the sport.”

On the other hand, Federer added that one has to be at the top of his game to beat a tough player like Djokovic. Federer stated Djokovic is equally brilliant while playing on all kind of surfaces and there is hardly any chink in his armour.

“Novak, obviously he can play on all the surfaces extremely well. He always brings a certain level of play, which is extremely high, so to beat him you have to be at your best,” acknowledged Federer.

Both Federer and Djokovic have brought their best whenever they have played against each other. Djokovic is 33 years old whereas Federer is 39 and it is believed that both of them still have some fuel left in their tank.

Djokovic will be seen next at the Australian Open whereas Federer has raised doubts over his participation as he hasn’t yet fully recovered after knee surgery.